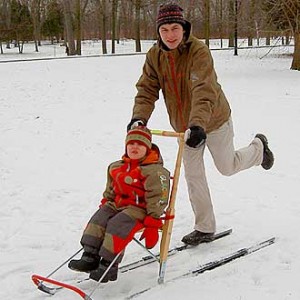 Have you ever tried a kicksled?

I hadn’t even heard of a kicksled – or “trottinette de neige” – until Christmas break, when we discovered these Scandinavian-style sleds at Le Village du Père Noël and on Mount Royal.

They’re kind of like a scooter for winter – or a chair on skis – and there are a number of ways for families to use them. A parent can stand on the back, doing the “kicking” part, while a child rides comfortably on the chair up front. Or, children about age 3 and up can power their own kicksleds (they come in various sizes), using the chair simply as a resting place when they are tired, or as a somewhere to put a bag.

New to Montreal
Montreal resident Paul-André Moisan decided to start importing and selling kicksleds in Montreal around two years ago, after reading about them in a magazine. “I thought, ‘Wow, that would be a great thing to do here in Canada,’ ” Moisan says. Kicksleds have been used in countries like Finland and Norway for more than 100 years. “I would say at least one in two families in Finland has them,” Moisan says. The first time he used his own on Mount Royal, he said people were stopping him to ask questions and take pictures.

Great way for parents and kids to stay active
Kicksleds are a super option for parents who want to combine exercise and family time. Moisan, father of a five-year-old, said he didn’t have the opportunity for much physical activity after his son was born. Even when kids hit the toddler stage, it’s tough to find winter activities they can enjoy – it’s hard enough for them to function in a snowsuit. “You can’t go skiing, you can’t go skating,” Moisan says. “Tobogganing is fun, but it’s not exercise.” 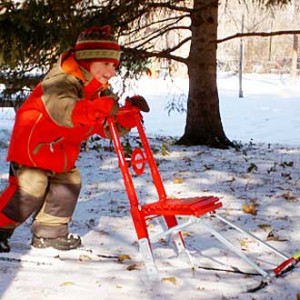 Children can sit on the kicksleds from about age two; Moisan said that for his first few outings when his son was at that stage, he used a nylon buckle to keep him in place on the seat. But after a few runs, children learn to hold on and keep their balance. Moisan said he has also had customers who have attached a car seat to the kicksled chair. Now that his son is five, he drives his own kicksled. For families with two kids, the older one may be able to stand on the runners, positioned between the parent and the chair.

Head to the mountain, or just to pick up the kids
In terms of where and when to use kicksleds, there are lots of options. For weekend outings, Moisan says his favourite places are on Mount Royal and at Parc Lafontaine. “As long as it’s not too hilly and the snow is packed, anywhere would do.” Moisan has also used his kicksled for picking his son up from kindergarten; if the snow is fresh and there isn’t too much sand or salt, kicksleds can handle city sidewalks. Moisan says that he’s received positive feedback from both parents and dog owners, who like the fact that they can get a workout with their furry friends tied to the sled. 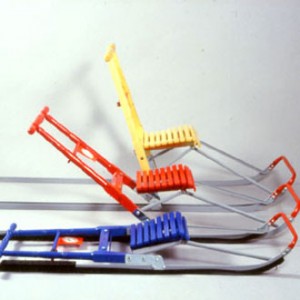 Where to try kicksleds in Montreal
Moisan’s kicksled business, LaGlisse, remains a sideline but it’s definitely picking up speed. On the website, you will find a list of parks where you can either rent or try kicksleds (including Mount Royal, Oka and Bois de Liesse). The latest location is TOHU, where the use of kicksleds is free.

On the website, you’ll also find a list of Montreal stores that sell kicksleds, and will be able to see the various models available if you are interested in buying one for your family. Models for children cost $209; the most popular model for adults costs $249. All of them fold down flat for storage or transport (on the roof of a car, for example). They’re made in Finland and have a one-year guarantee.

Note: If you’re looking for a classic wooden sled or toboggan, LaGlisse sells those, too.