On Jan. 17, singer/songwriter Alexandra Delgado will be performing at the Cote St. Luc Public Library featuring songs from her album Kissy Kissy Time. A classically-trained musician with a degree in musicology from the Paris-Sorbonne University, Delgado’s melodies are clear and simple, predominantly driven by the piano.

Her album features original songs such as Baby in the Belly and Monkey on a Donkey, which tell different stories through fictional characters. Originally from Quebec City and raised by Colombian parents, she also sings in French and in Spanish.

She also acts out different parts of the songs with stuffed animals and other props. In songs like Ten Little Fingers (see video below), Delgado has audience members count in different languages. She encourages kids to dance along to the music, as she believes this interactivity helps keep their attention, especially for the younger ones.

“I really believe the CD is a great tool for kids on many levels: it develops the ear for music and languages, the stories develop the imagination and the movements in the shows develop fine motor skills,” Delgado said. 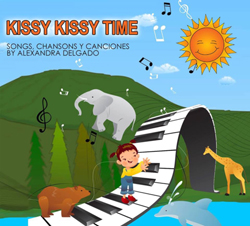 Copies of the album can be purchased at Archambault, ordered from Amazon or downloaded through iTunes.

Delgado will be performing as part of the Teddies & Melodies series at the Cote St. Luc Public Library, 5851 Cavendish Blvd. Cote St. Luc. Tickets cost $3 for library members, $5 for non-members and can be purchased at the library’s main desk.