Big cities often offer unique attractions and fun for families, but the price for a vacation stay can climb quickly. After paying for hotels, food and transportation, it’s no surprise that people want to find ways to cut costs on things like admission fees to attractions. Happily, when visiting Toronto, you can find some lesser-known, and thus less-crowded, alternatives to the major attractions. 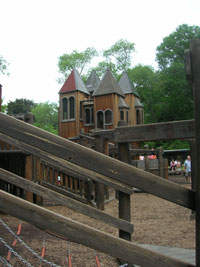 High Park Zoo has been in existence in one form or another for 110 years and is a popular family attraction in Toronto’s largest park. A pleasant stroll along a tree-lined pedestrian street reveals llamas, emus, yaks, bison, deer, peacocks and wallabies. On our family’s last visit, we were lucky enough to come across a zookeeper walking a two-day-old llama. “It’s to socialize them,” he said while encouraging the thrilled children to pet ‘Dusty’.

Jamie Bell Adventure Playground is another great attraction for kids in High Park. Children contributed to its medieval castle design, and the interconnected play structures are filled with hidden passageways. After the kids are played out, you can take a 25-minute ‘trackless’ train ride to see more of the park. The ride allows for one stop-over privilege along the circular route.

Good places to stop include Grenadier Pond, named for the soldiers who used to practice maneuvers here and Colborne Lodge, the historical home of John Howard without whom the park wouldn’t exist. He donated it in 1873, as a “place of public resort for the citizens.” Howard and his wife Jemima were unable to have their own children, but often had their nieces and nephews stay over for extended visits, and they no doubt would have been delighted by the children who play and explore their beloved property — now known as High Park.

Cost: $3 per adult (one way), $0.75 per child. $10 family pass — unlimited travel for two adults and up to 4 children/youths (available on weekends & statutory holidays only).

Toronto’s streetcars are as much a symbol of the city as the CN Tower and their red and white downtown presence is unique among North American cities. Most children, especially boys, love riding on them.

The 501 route starting from Neville Park in the east end and ending at Long Branch on the Mississauga border was named by National Geographic as one of the top 10 trolley rides in the world.

You’ll get to see a wide cross-section of the city including old and new City Hall, Nathan Phillips Square, Osgoode Hall, and the trendy neighbourhood Queen West; even in more down-trodden areas like Parkdale, you’ll appreciate the diverse architecture and many faces of Toronto.

Warning: Although interesting, the route is long, taking 90 minutes IF all goes well, but with more than 40,000 commuters riding it everyday, there are often problems. Expect delays, sometimes long ones. It can also get very crowded in the middle of the route, so get on early in the route (west or east), and avoid rush hour.

A shorter, but equally interesting cross-city route that our family loves is the 506 streetcar. It begins at Main subway station and passes through some of Toronto’s diverse ethnic communities including Little India and Old Chinatown, before finishing at High Park.

A 30-minute ferry ride from downtown transports you to a different world. With no cars and a cool breeze blowing off Lake Ontario, Toronto Islands has 600 acres of parkland. It is ideal for strolling, rollerblading, biking and picnicking on hot, lazy summer days.

You’ll feel as though you stepped back in time at Centreville, an old-fashioned amusement park complete with a 1907-handcrafted carousel. Most of the rides are more suited to younger children, but all ages will enjoy the antique Ferris wheel and the train ride that takes you through the grounds.

Franklin’s Children’s Garden on Centre Island is another hit for the kids and it won’t cost you a dime. Franklin, Goose, Rabbit, Beaver and Snail are permanent bronzed residents of the park, inspired by the popular Franklin the Turtle book series. Kids can explore a tree house, go through a vine tunnel, search for real turtles in a pond and climb up a snail trail. On summer weekends, storytellers and artists perform for children in this enchanted place.

With so many great things to do and see in Canada’s biggest city, it’s tempting to want to cram everything in. But for a family vacation that’s easier on your wallet (and your nerves), skip some of the major attractions and discover another side to Toronto.