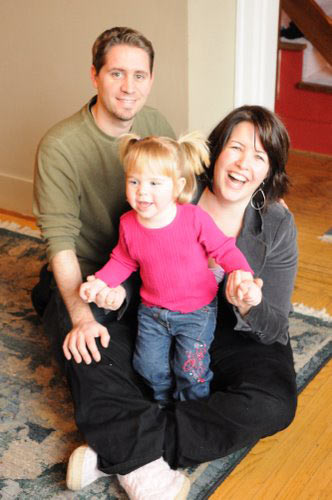 Theresa Piercy and her family.

It’s been a while since I posted an I Spy interview, which is where we check in with an interesting Montreal parent to find out about who they are and how they entertain their munchkin(s) on weekends.

I came across Theresa Piercy’s blog No Place Like Home several months ago and was struck by her sharp sense of humour, cute family photos, and her intriguing job: She’s an associate producer working on a movie called The Year Dolly Parton Was My Mom. I had to ask this Montreal mom more about what she’s up to.

Theresa: I am an associate producer at Palomar, an independent film production company here in Montréal.  I moved here from Vancouver in 1996 for the film production program at Concordia and … stayed. You can blame my St. Eustache-born husband for that!  Or partly anyway.  I fell in love with him and with this amazing city at the same time. We have one daughter, age 2½ and we live in Villeray.

ISM: Tell us about The Year Dolly Parton Was My Mom and what it’s like to work on making a movie.

Theresa: Working in the movies is, in a word, crazy. Really cuckoo. Tons of long days, tons of hard work, major pressure  – kind of like parenting, only without the snuggles. I wrote a recent blog post on Movie Set 101 with some photos from our shoot.

What I do love about it, though, is that no two days are ever alike. I get to use all kinds of random skills: from freakish actor-name recall for casting, to handling last-minute legal requests, to tracking down stock photos, to coordinating travel, to getting contracts signed, to negotiating with the bank, to whatever else comes along. It’s definitely never boring.

The fun part of producing is being with that project from its conception through development, prep, production, post-production, right until the end. It satisfies both the creative and business parts of my brain.  I think this particular film was difficult for me because it was the first project I’ve done since having a baby that required so much of my attention. It’s tough to do a big day at the office, then come home and start your second shift without feeling like someone is always getting shortchanged. That feeling of failure is hard to take after a while.

ISM: Can you share any recent personal parenting victories?

Theresa: In light of my recent full schedule (see above) it’s hard to feel like we’ve had any victories. We foolishly embarked upon the whole potty training adventure right smack in the middle of all the craziness and, while it was painful at the time, I’m happy now that we’re done!

Thanks to collaboration with daycare and consistency on our part, we have banished diapers from the house (except for sleeping). We did the run-around-naked and sit-on-the-potty-every-15-minutes combo technique.  It took a few days of cleanups and longer than I thought it would to get her to actually poop on the potty but, all in all, it wasn’t too painful.

As for sleeping through the night? Ha! Her 2-year molars have been coming in on and off for AGES now. I blame them for our current schedule at least 1, if not 3 wake-ups per night. I’ve given up on ever paying back my sleep debt!

ISM: If you could bring one family-friendly activity or attraction from Vancouver to Montreal, what would it be?

Theresa: The beach, no question.

ISM: What is a favourite family destination for you in Montreal?

Theresa: Frankly, anywhere that has good coffee works for us. Otherwise we love Jarry Park, particularly the wading pool.  Thanks to I Spy we discovered the Indigo Books in Laval – awesome. We are frequent visitors to Funtropolis as well. We’ve hit pretty much all of the local indoor playgrounds and Funtropolis is the best. But we’re always on the lookout for more ideas!

If you want to follow the filming adventures of The Year Dolly Parton Was My Mom, here’s the Facebook hookup.