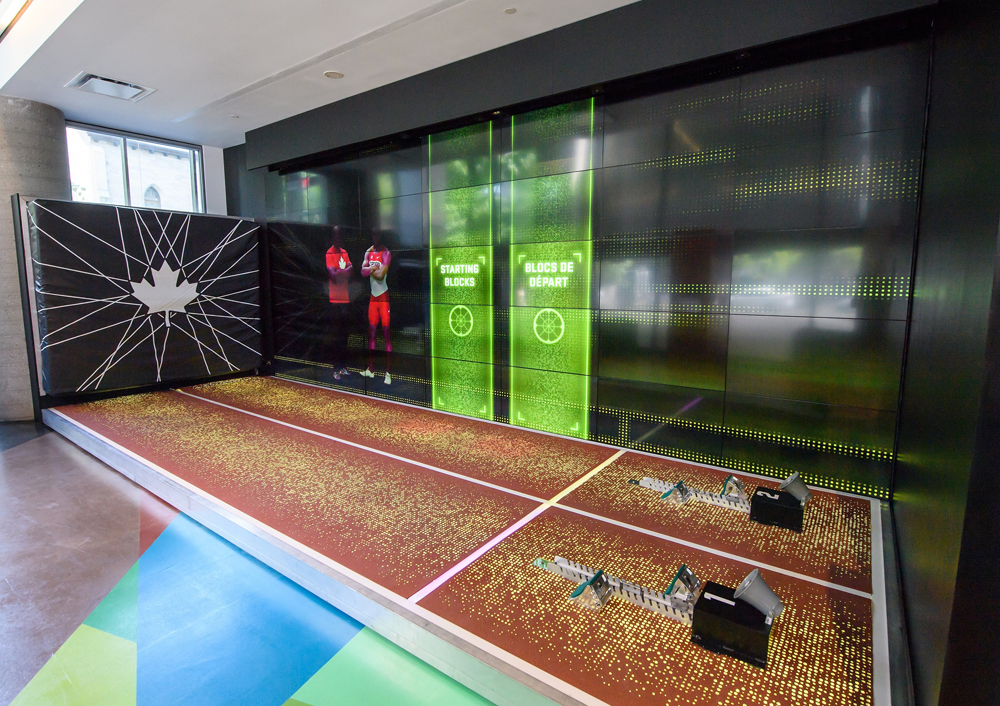 I will never forget my son’s epic Olympic experience. I watched nervously as he prepared for the 100-metre sprint, putting one foot and then the other in the starting blocks, carefully placing his fingers just before the starting line, and lifting his hips in anticipation of the starting gun. Bang! He was first out of the starting blocks and managed to hold his lead until the end when he raised his arms in celebration.

Alas, this wasn’t the official “Games;” my 13-year-old son Max was trying out his sprinting ability at the interactive exhibit called the Canadian Olympic Experience, which opened downtown just over a year ago to celebrate our country’s most elite athletes.

After we watched a short video of Bruny Surin explaining that he was inspired to become the fastest runner in the world after watching Carl Lewis at the Olympics, it was time for Max and his friend Ben to try out the 100-metre sprint.  After the short race, their statistics were posted on a big screen: who won, their times and who was first out of the starting blocks.

The exhibit is divided into three zones. We found the first one was the most fun, as there are several interactive aspects, including trying your hand at various sports and creating an athletic profile that determines which sports are best suited to your abilities. I tested my leg strength by jumping as high as I could and my balance by holding a pose on one leg. I measured my upper body strength by squeezing a device as hard as I could and assessed my visual perception by following moving rings on a screen. Once I completed these tasks, it was deemed that I would be a good fit for volleyball or Taekwondo – two sports I have never tried.  Hmmm. Guess it’s time to put away my tennis racket?

Then the boys jumped into an actual two-man bobsleigh and rode a virtual reality ride to feel what it is like to travel at a such a fast speed down a narrow, twisting, icy track. Two sports simulators allowed us all to test out our freestyle skiing mogul skills, as well as fencing, with a brief introduction from Canadian athletes teaching the basics about each sport.

Zone two tells the story of the history of the Olympics through archival images, audio clips, video footage and artifacts.  Fun fact: the obstacle race used to be an Olympic sport. This area also explains the hard work and dedication involved in becoming an elite athlete. We listened to an audio clip of Clara Hughes, a cyclist and speed skater who won multiple Olympic medals in both sports. She recounts how watching the Olympics on TV as a young girl inspired her to put her troubled life back on course and to become one of only five athletes in the world to win a medal at both the summer and winter games.

In zone three, we were taken on an emotional journey by watching a 10-minute multimedia show that uses a wall-to-wall curved screen with a sound and light effects to display some of the most heartbreaking and heartwarming stories of Olympics.  There is touching footage of athletes walking proudly at the opening ceremonies, waving and enjoying the moment that led to a culmination of years of hard work and perseverance.  What a great lesson for children about what they can achieve with courage, grit and determination.