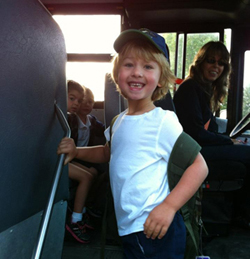 Despite the convenience, many parents have concerns about their child taking the school bus. However, school boards have a number of regulations in place that will help parents feel better about the physical safety and emotional well-being of their kids.

Dvorah Bowen was excited to get her son Aaron ready for kindergarten last year — the fun of a new backpack and brand new school supplies — but she was also a little apprehensive about the bus ride he’d be taking twice a day to and from Westpark Elementary in D.D.O. She worried about his physical safety and, with all the bigger kids on the bus, his emotional safety, too.

Bowen knew that taking the bus made sense for her family, allowing them to avoid the morning and afternoon jostling to find a spot to pick up and drop off their son. “I know that he’s getting to school on time and I know when he’s supposed to get home,” she says.

Luckily, Bowen’s concerns were alleviated by a helpful bus-orientation package sent by the school. It contained a letter providing all necessary information, like the location and times of pick up and drop off. It also included an identification tag to be inserted inside of Aaron’s backpack and, most importantly, a purple tag to be attached on the outside, which lets drivers know that the child requires parent or guardian supervision when dropped off after school.

Bowen was also comforted knowing that her son would be sitting in the front of the bus. According to Diane Pellerin, superintendent of transportation for the Lester B. Pearson school board, schools have now adopted bus seating plans with designated areas for different ages. Younger kids get to stay at the front of the bus in order to be close to the driver.

Pellerin also notes that buses have recently been equipped with GPS systems that track their location every 10 seconds. “It gives us the actual route the bus takes, times at stops and verifies the vehicle’s speed,” she says.

One safety issue sometimes raised by worried parents is the lack of seat belts on school buses. Luc Lafrance, general director of the Association du Transport Écolier du Québec (ATEQ), which represents 90 per cent of the school transport industry, says there is a common misperception that seat belts on buses would increase safety. Studies have shown that the improper use of seatbelts can cause major injuries to the head, neck and abdomen. Given that seat belts need to be adjusted every time for each child, ensuring they’re being used correctly becomes problematic on a school bus.

Instead, explains Lafrance, buses are specially designed both on the outside and inside to protect children in case of impact. And, he notes, “according to Canada transport using the school bus as a mode of transportation is six times safer than any other means of (ground) transportation.”

Lafrance adds that bus companies are required by the Société de l’Assurance Automobile du Québec (SAAQ) to have their vehicles inspected daily by the driver. The buses must be brought to a government-approved garage for service four times a year. School bus drivers need to follow 15 hours of training, which they must repeat every three years. As well, background checks are done on all bus drivers.

To ensure a safe experience for all children, the ATEQ has also put in place several anti-bullying measures. Lafrance explains that they’ve created special no-bullying stickers to be placed inside school buses. The organization also requests that all school bus companies have their drivers trained in how to handle bullying incidents.

However, Lafrance says parents have a key role to play in school bus safety. He emphasizes that a parent or a guardian should accompany their children, especially the young ones, to the bus stop and that they arrive there a few minutes before the pick-up time in order not to rush onto the bus.

Indeed, Bowen says that she always aims to get to the bus stop a bit early. She prepared Aaron for his first ride on the school bus by telling him to stay in his seat, to pay attention to those around him and by, “making the whole experience for him into an adventure, something he gets to do on his own.” And even now when asked by his parents what the best part of his day is, Aaron still says, “the bus ride.”