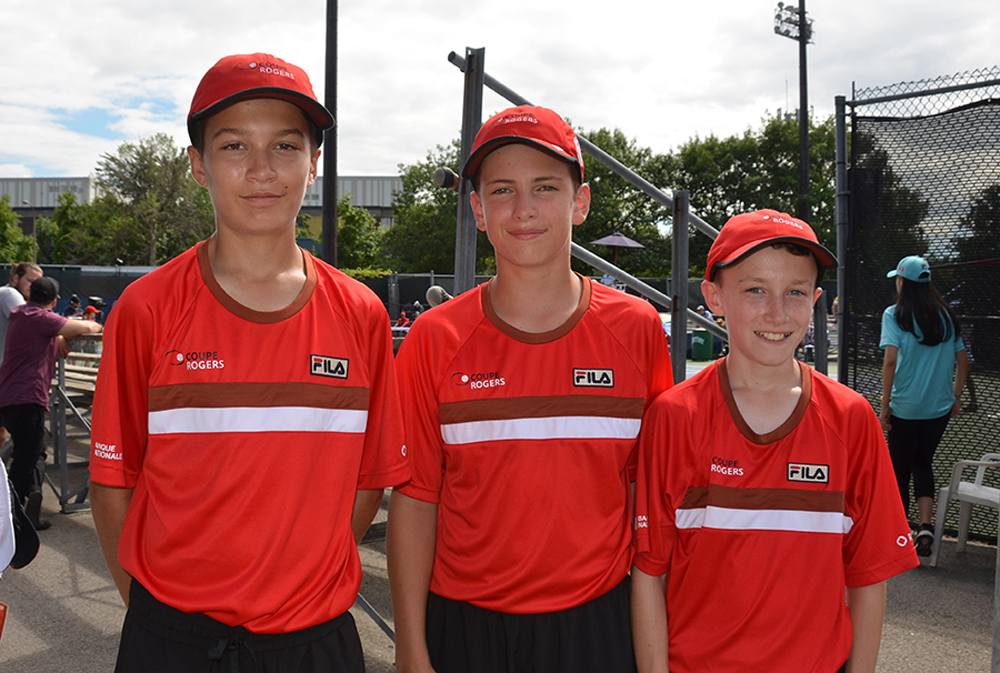 Olivier Stoub says volunteering as a ball kid during a major tennis tournament is almost a sport in and of itself. The 16-year-old from N.D.G. explains that the combination of retrieving and supplying balls, providing players with towels and shading them with umbrellas during breaks means there is always something to keep you running. Every August, the world’s top male and female players compete in the prestigious Rogers Cup Tennis Tournament, which alternates location between Montreal and Toronto.

Organized by Tennis Canada, this year’s tournament takes place Aug. 4-13 and will host tennis pros like Andy Murray, Rafael Nadal and Canada’s own Milos Raonic at the Uniprix Stadium in Jarry Park.

The young local ball kids are integral to making each match run smoothly. They need to be quick and agile in order to stay out of the way, and this part of the job can be quite intense. “There’s a pretty demanding energy,” says Olivier, a two-time volunteer whose interest was initially piqued after hearing rave reviews from his friends at the Monkland Tennis Club.

Applying to volunteer is quite straightforward: after filling out an online form, applicants are contacted by Tennis Canada and informed of the volunteer fair and tryout dates. Olivier says the volunteer tryouts are both exciting and stressful as the kids are put to the test on the courts. With training and coaching throughout, the kids discover what it is like to be a ball kid and are observed to see if they are fast, have good reflexes, can throw a ball accurately and know how to follow a tennis match. “They test your fitness by making sure there are a lot of running drills,” Olivier said. Each person is assigned a number and coloured pinny and, at the end of each of the three tryout days, organizers call out the numbers of kids who have been cut.

“If you make it to the final day, they change the way it is done and call out the numbers of the kids who have made it,” he said. “It’s pretty exciting.” Each year, approximately 120 kids apply and 35 are chosen (another 65 are rehired from previous years). If selected, the boys and girls are contacted for scheduling and training sessions, where they receive uniforms and accreditation passes.

So what exactly does Tennis Canada look for in a young volunteer? Ball kids must be between the ages of 12 and 16 (teens over 16 can volunteer in other capacities at the tournament). Applicants must be available to work for the entire tournament, be friendly, reliable and professional. A basic understanding of tennis is an asset.

As the tournament progresses, fewer and fewer ball kids are needed, and, much like a regular tryouts, cuts happen every night. Those most likely to be axed are the younger kids with less experience, but they can still use their passes to attend matches for free or play a few rounds of tennis of their own.

Since their main duties take place in the midst of the action, ball kids have the best view in the stadium and get more face time with players than any other spectator in the building. However, that doesn’t mean everything they see is pleasant.

Olivier’s father, Jeff, recalls one evening last year when his son returned home from a day’s work with a memorable story.

“A player who was losing was swearing a lot when the ball kids were giving her towels,” he said. “The kids thought it was pretty funny but they knew she was probably under a lot of stress.”

And it isn’t just the players who feel pressure, the ball kids carry a certain amount of weight on their shoulders too. “The biggest worry is that you will fail,” Olivier said. “I worry that a player will drop a ball because I didn’t give it to her correctly or that I don’t throw the balls quickly enough and I slow down the match.” But in the end, organizers assure the kids that this happens to everyone and the most important thing is it to recover quickly and concentrate.

While Olivier won’t be volunteering this year (he’s attending another camp the same week as this year’s tournament), his younger brother Étienne is returning after a great first experience in 2016.

If your child needs a little more incentive, the additional volunteer benefits should reel them in. Along with two complimentary tickets, the accreditation passes provide access to a reserved section where volunteers can watch matches outside of work hours. They are also supplied with individual uniforms, including two T-shirts, a Rogers Cup jacket, and an official hat and water bottle.

The tournament ends on a high note when all the volunteers are treated to brunch at a farewell party. Last year’s party took place on the final day of the tournament; prizes were drawn throughout the morning, with an iPad being the biggest giveaway. “It was really fun to see my friends and teammates one last time,” Olivier said.

While returning volunteers should have already received emails confirming their attendance at this year’s event, the deadline for newcomers to apply is July 4.

You can find the application form and additional information on the Rogers Cup website, www.couperogers.com/en/tournament-info/volunteers.