How I pulled off a great surprise for my son

A number of months ago, my son Max was in the living room when I heard Irish accents coming from our iPad mini. Every few minutes, Max would burst into fits of laughter. Curious, I asked him what he was listening to and he said: “It’s these twins from Ireland who upload videos of themselves playing Minecraft and they are hilarious. Oh, and by the way mom, it is appropriate for my age; they don’t swear or anything. They know a lot of kids follow them on YouTube.”

For the next couple of weeks, these voices became a household fixture. Any time Max was using the iPad, I could hear their laid-back, running commentary followed by his giggling. He became obsessed with these guys and their videos.

One day, I came up with a wild idea that I hoped I could pull off. We would be going to Ireland in a couple of weeks on holiday and I decided to get in touch with the twins to find out if they would be open to meeting Max.  I thought they might make the time when I told them what our family had been through these past couple of years. I logged onto their YouTube account and sent them a note.

“Hi lads, I’m a Canadian who used to live in Dublin and I’m heading over with my 9-year-old son to see friends and family in a couple of weeks. My son lost his father to pancreatic cancer seven months ago; it has been a very difficult two years for us with my husband battling this horrible disease. Max is obsessed with you guys and is always watching your Minecraft videos. I was wondering if you could take 20 minutes to meet him when we are over – I could bring him to you. I know it would make him very happy. Let me know. Thanks.”

Days passed and I got no response; one week, two weeks… nothing. But I wasn’t surprised – these identical 24-year-old twins are wildly successful and have hit the big leagues in this new world of gaming where people make videos and get money from companies that advertise on their YouTube channels. 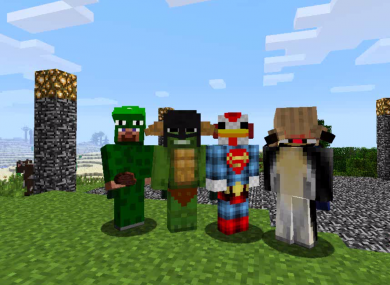 The LittleLizardGaming channel, run by Ryan and Scott Fitzsimons, has more than 1.7 million subscribers and gets hundreds of thousands of visits with every new video they upload. All of this success has come in less than three years.

A few days before leaving on holiday, I decided to resend the message and wrote at the top: “Sorry to bother you again, I just thought I would send this one more time in case you didn’t get it.”

About an hour later, I heard “ping” coming from my iPhone. When I glanced over at the screen, I saw the LittleLizard icon. My heart started racing as I read their response: “We didn’t see the first message and, yes, we would be more than happy to meet Max.”

I didn’t care how far around Ireland I would have to travel to take Max to meet them but, as it turned out, they lived 10 minutes from where I was staying. They told me to “bring Max to the house, we will show him where we record the videos and we will play Minecraft with him for a bit.” I was so excited; I thought I was going to be sick.

Best of all, I decided to make it a surprise. So, on day five of our trip, I told him we were going to visit a childhood friend. (I brought along my friend’s son, Simon, because I was worried Max would be super shy). Max complained on the way, saying he would have preferred to stay behind and play at Simon’s house. Inside I was giggling but I kept my composure as I said: “Maybe they will have a computer and you can play Minecraft.”

As we got out of the car, Max looked around in awe at the massive, detached homes and said: “Wow, your friend must be rich – is this where all the rich people live in Dublin?” I glanced over at their house and saw that the huge electric double gates had been opened and the front door was ajar. A tall, young man walked down the stairs towards us as we approached the house. Max was a few feet behind me so I quickened my pace, shook his hand and introduced myself. When Max caught up, he nonchalantly said hi. Then I asked Max if he recognized this man and he said no. So I said: “Are you sure? Take another long, hard look and see if you might recognize who this guy is.”

After about 30 seconds, all the blood seemed to drain from his little face and his jaw dropped as he slowly came to realize who might be standing in front of him. “Are you Ryan or Scott,” he asked hesitantly.  “Yup, I’m Ryan,” was the answer.

Ryan shook Max’s hand and asked him if he would like to come inside and see where they record the videos. All Max could muster was “sure” as he followed Ryan up the stairs, not even realizing he had let his knapsack fall to the ground.  Soon after, Scott came back from the gym and joined them in the media room. I spent some time talking to their mother, who said she is so proud of everything the boys have accomplished and of the type of young men they’ve become. “They do a lot of things like this that people don’t know about,” she said.

Approximately half an hour later, the twins gave us a tour of the 8,000 square-foot house; complete with indoor swimming pool, bar, sauna room, changing room, Jacuzzi, games room, and a cinema room, with built-in recliners. I glanced at the mom and said quietly: “All of this is because of gaming” – she had a huge smile on her face and nodded.

About a week after we got home, I heard Max yelling for me at the top of his lungs from upstairs: “mooooom, mooooom, come heeeeere.” I thought something was wrong but the screams were from sheer excitement. Max flashed the iPad screen at me and there, on Scott and Ryan’s Instagram page, was a photo of him, Simon and the twins with a caption: “It was cool meeting Max and Simon earlier this week.”