Have you adopted a child from China?

As the adoptive parent of a girl born in China, Suzanne Hanna wanted her daughter to learn about her heritage and to connect with other children living a similar situation. So when she heard about a Chinese Culture Camp run each summer by the Common Ground Centre in Vermont, she was intrigued — and a bit hesitant. A true city girl, Hanna says the last thing she wanted to do was rough it in the woods, but she thought her 8-year-old daughter Tia might like connecting with nature and other adopted children.

As it turned out, the centre, located just a few hours drive from Montreal, offered comfortable accommodations with indoor plumbing and hot showers. During their stay, Tia and her mother practiced Tai Chi, made dumplings, played the Chinese game Mah Jongg using patterned tiles, sang folksongs, tried calligraphy, stargazed and assisted in Chinese hot and cold tea ceremonies. Families could pick and choose as many activities as they wanted to. In fact, Hanna had time to relax and chat with other parents as their children played. She appreciated being among adults who were raising visible minority children.  “It was really nice to be surrounded with families like ours,” she explains. “We didn’t have to explain our family to anyone.” And the friendships built at camp have endured; Hanna and her daughter were going to spend spring break with one of the families they met at camp. 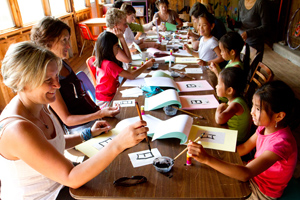 Elin Melchior has been the program coordinator for the Chinese Culture Camp and is also the mother of a girl adopted from China. She says the camp helps parents and kids celebrate Chinese culture while giving them space and time to speak about the challenges they face. Melchior adds that activities are taught by leaders from the Chinese community as well as by young people who grew up in adoptive families. The camp organizes sessions where kids and teens can talk about issues like racism and what it is like to travel back to China. However, Melchior adds that the camp seeks a balance between serious themes and fun — families are encouraged to hike, swim, sit around the campfire and make new friends.

For Hanna and her daughter, the experience was one they won’t ever forget. “It was one of the most incredible family vacations we ever took,” she says, “Everyone got what they needed. We’ve already reserved for next year.”