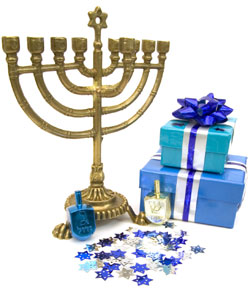 One of the more vivid memories of my early childhood is waiting in line to visit a shopping mall Santa Claus. Despite overheating in my snowsuit, I held my breath as I climbed up onto his knee and stared at his massive white polyester beard. This was a completely unprecedented experience for a little Jewish girl, but my mother had yielded to my incessant demands to meet the big guy himself.

My heart hammered in terror now that I’d finally come face to face with Santa. I’d tried to be a good girl (at least for the preceding hour) and I was determined to make my own requests for gifts. I rattled off a list of toys I’d seen advertised on TV. I was very hopeful. And then I waited in vain for them to drop down our chimney on Christmas Eve.

The revelation that Christmas was not for me, no matter how good I was, is a common one for many Jewish kids. It’s hard to ignore the growing anticipation in stores and on TV, the ramped up excitement over gift-giving, the chatter of non-Jewish friends speculating on the coming bounty, the persistent, soft-focused images of family and friends celebrating the season.

Hanukkah, which tends to fall somewhere around the same time as Christmas, has always paled in comparison, at least in my mind. Sure we light candles, eat tasty fried potato pancakes (called latkas) and jelly-filled doughnuts (called sufganiyot), but the holiday involves substantially less glitter, less pageantry and, let’s face it, fewer gifts. As a child, we’d get small bags of gold covered chocolate coins, maybe a few dollars, occasionally a small gift from our grandparents. Nice, sure. Any other time of year, we’d be thrilled. But frankly, it wasn’t the kind of bounty we were seeing on TV and hearing about from our non-Jewish friends.

In the intervening years, as I’ve had my own three children, I’ve observed a cultural shift in the celebration of Hanukkah. It’s still very much about bringing family together, playing with dreidels (a kind of spinning top) and lighting candles to celebrate the reclaiming of the second Temple in Jerusalem by a band of heroic fighters. But it’s become a larger enterprise, one in which more substantial and plentiful gifts seem to be playing a part. Kids and parents report giving presents every day for the full eight days. In case you are having trouble with the math, that means I’ve found myself buying 24 gifts for my kids, not to mention the ones for nieces, nephews and cousins. Yikes. How did that happen?

The evolution of Hanukkah

Larger, more elaborate parties have joined the traditional family celebrations as part of the experience. Shops have a wide range of Hanukkah gift-wrapping paper, colourful lights and decorations. Even the dollar store is selling Jewish-themed snowglobes.

There is still no magical gift-giving character (to my knowledge), though my daughters enjoy speculating on the kind of animal he would use to carry his cargo. Something kosher, for sure.

The evolution of Hanukkah (in which this commercialization has certainly played a big role) is part a general trend towards making other Jewish holidays more conventionally colourful and kid-friendly. In our neighbourhood, kids now go on a “sukkah hop” each fall, collecting candy and treats as they visit the temporary structures people erect to mark the 40 years in which the Jews wandered through the desert after the exodus from Egypt. The dress-up parades of Purim, a springtime holiday based on the Book of Esther, seem more elaborate than they were in my childhood and families can buy a whole range of products for Passover.

I may well be more sensitive to this commercialization trend because my husband, Martin, grew up celebrating Christmas in the United Kingdom. His entire extended family graciously sends boxes of Christmas presents for our kids each year. And I have to confess that as I watch the pile of brown paper parcels growing in our closet as the end of December approaches, I begin to worry that Hanukkah will inevitably be stuck in second place. As my friend Rachelle says, Jewish holidays may be big on meaning, but they’re kind of lacking in the fun factor.

So all of this new-found glitz helps Jewish parents with the inevitable explanation that Santa Claus won’t be visiting their children. And despite whatever feelings we might have about over commercializing life in general, there is certainly a real relief in seeing one’s community represented in different ways in popular culture.

This is why every year my yearly resolution to scale back on the size and quantity of presents crumples in the face of my Hanukkah anxiety. Am I over-competitive? Possibly. A little neurotic? Certainly. But I have to confess to the pleasure of yielding to the generous spirit of the holidays. As the two piles of presents – one wrapped in blue and white paper, the other red, green and gold – grow, I figure our kids end up winning. Of course, we balance the excess by focusing on selecting gifts for others, on the communal making and eating of special foods, on charitable donations and acts for those in need.

So now when I pass Santa at our neighbourhood shopping mall, kids in tow, I feel relieved that my girls won’t know my childhood disappointment of not being part of Christmas. They get to experience the holiday season as joyful and welcoming, dollar store snowglobes and all.