When Nelson Mandela passed away last year at the age of 95, the world stopped and mourned. Rarely has a public figure been celebrated on such a worldwide scale, but Mandela’s work to end apartheid in South Africa inspired a generation of people striving for peace and justice.

At the time of his death, younger children may have had a hard time comprehending the impact of his achievements and the sadness of his death. But his legacy lives on, and this February marks the 25th anniversary of his release from prison, where he spent 27 years behind bars for his opposition to the system of apartheid.

For children, 25 years may seem like a lifetime, but the reality is that it was not that long ago that this form of racism was still institutionalized in South Africa. This anniversary is a reminder for all of us that acceptance of all as equals is the best path towards peace. What better moment to share with children the profound legacy left by Nelson Mandela than now.

Author and illustrator Kadir Nelson has written several children’s books about the rich history of African and African-American culture. In his latest book he takes on the incredible life of Nelson Mandela. Even before opening the book, readers are struck by the wisdom and grace of Mandela through a striking cover illustration that portrays a close-up of his face in old age, his iconic white hair filling the frame. The book covers Mandela’s youth growing up in a tribal village through to his release from prison and election as President of South Africa. The poetic language throughout emphasizes the experiences in Mandela’s life, such as the colonization of the ancestral land of his people that led him to become an activist and a freedom fighter. It captures his days as a student, where he could not go to school with Europeans, and his outrage at seeing his homeland divided along colour lines. Children will be captivated by the grand and thoughtful illustrations, which reflect so well the tragedy of apartheid, as well as the determination of Mandela to create a just society. 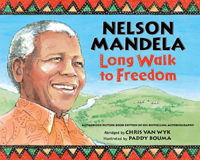 Not long after his release from prison and election as President of South Africa, Nelson Mandela published his renowned memoir Long Walk to Freedom. In it, he recounts his remarkable journey to end apartheid in South Africa, including the long, hard years he spent confined behind bars without ever losing hope that justice would prevail. Children can also share in Mandela’s story through the abridged version of his book. Mandela’s words are paired with simple illustrations and other graphics, such as maps, a timeline and a glossary, to help children relate to his inspiring life. The book, which runs more than 60 pages, is told through the perspective of Mandela and allows young readers to gain insight into what inspired and motivated him to stand up for his beliefs. The first person approach allows young readers to connect with Mandela and to understand the reasons why he was so determined to end the injustice faced by his people. Despite its simplified format, the book still manages to cover many political, historical and cultural facets that will encourage children to learn more. 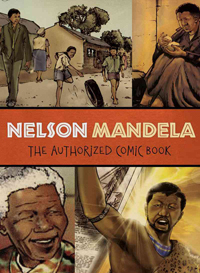 This graphic biography of Mandela’s life story brings together artists who illustrate the different parts of his life in various chapters. The artists drew on interviews and other archival material to tell the story of Mandela and even uncovered some new information since the publication of Long Walk to Freedom. Although the language is simple, this format serves well to capture the drama of Mandela’s story. It clearly conveys the dangerous risks that were involved in the activism required to oppose such a strong and powerful system. Children will be fascinated to learn how one person became one of the world’s biggest political heroes as well as a celebrated and beloved figure. Upon release of this book, Mandela said: “You know you are really famous the day that you discover you have become a comic character!”