Going on holiday with another family

Mix together two families, six days of shared highway driving, one house in Florida and a visit to Disney World at the height of the tourist season.

Many people would say a disaster, but I discovered differently when my husband and I teamed up with our good friends for a shared Florida vacation last summer.

The plan had our two families of five embarking on a road trip to Disney World. Both sets of parents liked the idea of sharing costs as well as knowing our kids would get to play with someone other than their siblings.

But there were some initial nagging worries: How would we split expenses? What would happen if the kids squabbled endlessly? Who would be responsible for planning the excursions to Disney World? Would this be the shared trip of a lifetime or the end of a good friendship?

With plenty of advanced planning, we ended up having a wonderful time. It helped that both families were keen on the idea from the outset and that we had been friends for some time. The kids — four girls and two boys ranging in age from 10 to 15 years — had been friends for several years. I had shared Girl Guides of Canada leader duties with Cathy, while her husband Chuck and my husband, Dan, had a mutual passion for hockey and coaching.

Still, I wondered about issues like different parenting styles. Would their kids be allowed to stay up later at night than ours, or be permitted to watch television programs that I was uncomfortable with?

To nip such potential problems in the bud, the adults met for some heart to heart conversations at least three times in the 10 months before the trip. We went over maps of the Disney parks to determine must-see attractions. We made our restaurant reservations well in advance, a good tip no matter what time of year you visit Disney. And we had some discussions about different bedtimes and how to handle hurt feelings between kids. We agreed that we could both discipline the other’s children should a problem arise and that we would be consistent with curfews.

Since my husband and I had made the long drive several time before, we also discussed our preferred travel strategy: finding hotels that offered breakfast, carrying along a cooler with sandwiches so lunch could be eaten at road-side rest stops and choosing a restaurant for supper.

On a warm July morning, we met at 5 a.m. for our departure. It felt like the start of a going-away-to-camp adventure. The three-day drive to Florida is tough, but having friends with us made it easier. Cathy and I joked about the number of washrooms we visited together in each state, while the kids took turns riding in each family’s van and sharing movies for DVD players.

When it came to choosing a place to stay, we had scouted out what seemed like an ideal location in Florida: a four-bedroom, three bathroom home just 15 minutes from the Walt Disney World gates. The house had its own in-ground swimming pool, a spacious backyard and plenty of indoor living space. Because the kids had viewed our rental home on the Internet about 150 times, room assignments had already been made so moving in was easy. 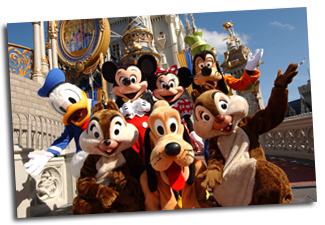 Our biggest challenge was visiting theme parks for several days in a row during Florida’s summer tourist season. We were facing peak crowds and record heat while trying to make everyone happy. It wasn’t always easy getting everyone out of the house early enough in the morning — arriving at a Disney park at 10 a.m. or later is a disaster if you want to beat the crowds — but we did it.

There were a few minor skirmishes between the kids. One night the boys revolted against sleeping yet again on the folding beds—so we did some re-arranging of the sleeping accommodations. The girls indulged in a bit of brooding or pouting from time to time and occasionally needed to take a break from each other.

Meanwhile, we adults pitched in to help with laundry, cooking and dishwashing duties. Our hottest debate was over the age-old question of whether or not to add oil to the spaghetti water.

I attribute the success of our trip to the fact that we all genuinely liked each other and were honest and upfront about so many issues.

After the drive home, we felt a real sense of sadness when Cathy, Chuck and their kids made the final turn toward their home, waving goodbye. The trip is now a very special memory in all of our minds (and we have the pictures to prove it.) It seems crazy that we took that number of people to Florida during the hottest, busiest season, but it worked.

Would we do it again? You bet. We’re already thinking ahead to next summer and wondering which beaches can handle our rowdy crowd of 10!