Home / October 2021 / Get scared silly with these Halloween movies 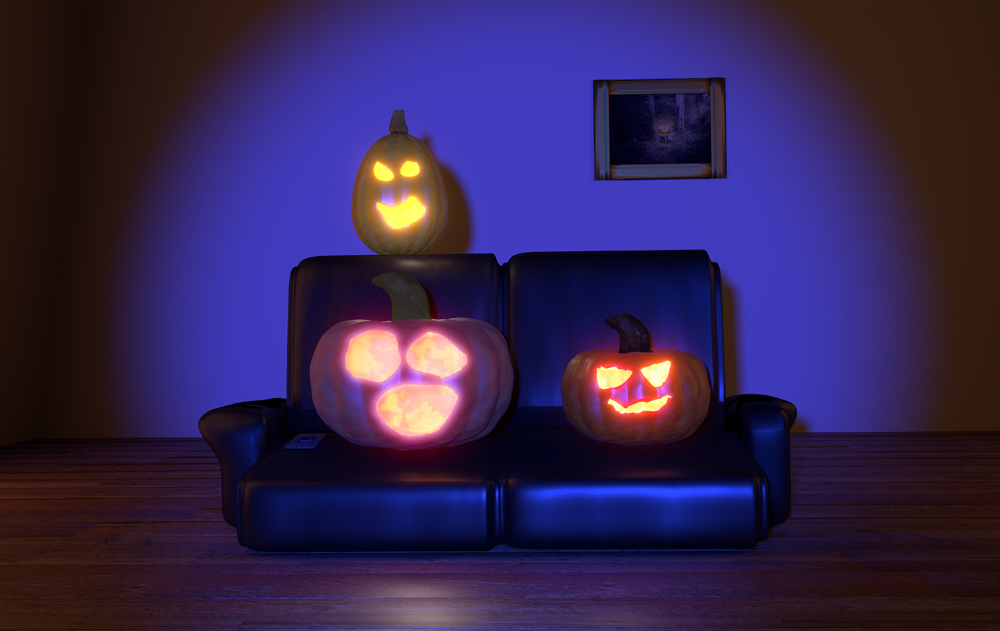 Halloween is once again upon us and that means decorating the house, picking out a costume for your little one, and, of course, eating candy!

There may be no better way to end Halloween night than by watching a scary movie with your kids. It can be daunting, however, to find one that’s appropriate for your children’s ages. Have no fear… Well, maybe a little bit of fear. We’ve compiled a list of Halloween movies for kids of all ages that’ll have them screaming for more.

We’ve also included information on each film from Common Sense Media, a non-profit, independent organization that rates movies based on their family-friendliness, so you can decide which film is best for your child. For more in-depth reviews and comments, visit commonsensemedia.org.

The annual Halloween Boo Festival is right around the corner and Curious George and The Man with the Yellow Hat are preparing for the festivities with pumpkin carvings, decorating and costume contests. But when he hears the tale of the Legend of No Noggin, a scarecrow that kicks passersby’s hats off, George is determined to get a picture of him to prove that his legend is true. (Available on YouTube.)

The Hundred Acre Wood gang is ready to celebrate Halloween, especially Lumpy the Heffalump and his good pal Roo, who are looking forward to trick-or-treating for the first time. But when Tigger tells them about the Gobloon, a dreadful creature that turns its victims into jack-o’-lanterns, they get cold feet. But the Gobloon also grants a wish to those who capture it, so Roo and Lumpy decide to muster up their courage and set out to find the monster.

It’s not the holidays without the Peanuts crew, and It’s the Great Pumpkin, Charlie Brown is a classic that appeals to all ages. Blanket-toting Linus writes his annual letter to the Great Pumpkin, a Santa Claus-like being only he seems to believe in. While the gang goes trick-or-treating, Linus heads to a pumpkin patch and waits patiently to catch a glimpse of his hero, a tradition he clings to year after year with the same disappointing results. Will this year finally be different?

Common Sense Media says: “You can almost smell the donuts, cider, and piles of leaves on a crisp fall day when you start watching It’s the Great Pumpkin, Charlie Brown.”

After inheriting her father’s mansion, Carrigan Crittenden is determined to find his supposed treasure hidden within. After being frightened away by the pesky ghosts in the house, Carrigan hires afterlife therapist Dr. James Harvey to chase the ghosts away. When James and his daughter Kat move in, Kat befriends friendly ghost Casper and his not-so-friendly uncles Fatso, Stretch and Stinky. In the end, it’s up to Kat, James and Casper to save the house from the evil Carrigan.

Common Sense Media says: “Haunted house tale not as mild as the cartoons.”

Count Dracula, reeling from the death of his wife at the hands of humans, builds a castle where he raises his daughter Mavis. Hotel Transylvania doubles as a safe haven for fellow monsters, and the vampire family often shares quarters with the likes of werewolves and mummies. All’s well until Mavis’s 118th birthday, when she asks to visit the outside world. A plot to frighten her into staying at Hotel Transylvania forever ends up luring something even scarier to the castle: a human boy who winds up falling for Mavis.

Common Sense Media says: “The only potentially frightening elements are Dracula’s ‘angry face,’ which he flashes when he can’t control his rage … and a mob scene that puts a central character in danger.”

After his parents die in a car accident, young Luke sets off to England on vacation with his grandmother. But while at the hotel, Luke discovers a gathering of witches who are preparing to rid the world of all children. The film is based on Roald Dahl’s beloved children’s book.

Common Sense Media says: “Some kids will love it, some may find disturbing.”

After his parents leave town on the eve of Halloween, DJ and his friends, Chowder and Jenny, discover that the house across the street is a monster with a secret past.

Common Sense Media says: “Frightful fun for tweens and up.”

After moving to Salem, Mass., siblings Max and Dani learn of the Sanderson sisters, who were executed 300 years ago for witchcraft. A combination of magic and spells – and the spirit of Halloween night – revives the Sanderson sisters and they start searching to suck the souls of young children.

When couple Barbara and Adam die in a car accident, they become confined to their home as ghosts. When their house is sold to the Deetz family, Barbara and Adam seek help from Beetlejuice, a “bio-exorcist” who promises he can scare away the annoying new homeowners. But Beetlejuice has some menacing plans of his own.

The Nightmare Before Christmas (1993)

Jack Skellington, a scarecrow known as the Pumpkin King, is in charge of planning the annual Halloween festivities in Halloween Town. But Jack realizes he’s bored of doing the same thing every year, and during a late night walk he stumbles into Christmas Town. Intrigued by this holiday he knows nothing about, he decides to bring it to Halloween Town at all costs. When things start to fall apart, it’s up to Sally, a rag doll who falls in love with Jack, to help make things right. Another classic family film, The Nightmare Before Christmas was re-released in 3D and on Blu-ray in recent years.

Common Sense Media says: “Some little kids who aren’t old enough to distinguish this fantasy from the goings on at Halloween (or those prone to nightmares) might steer clear.”