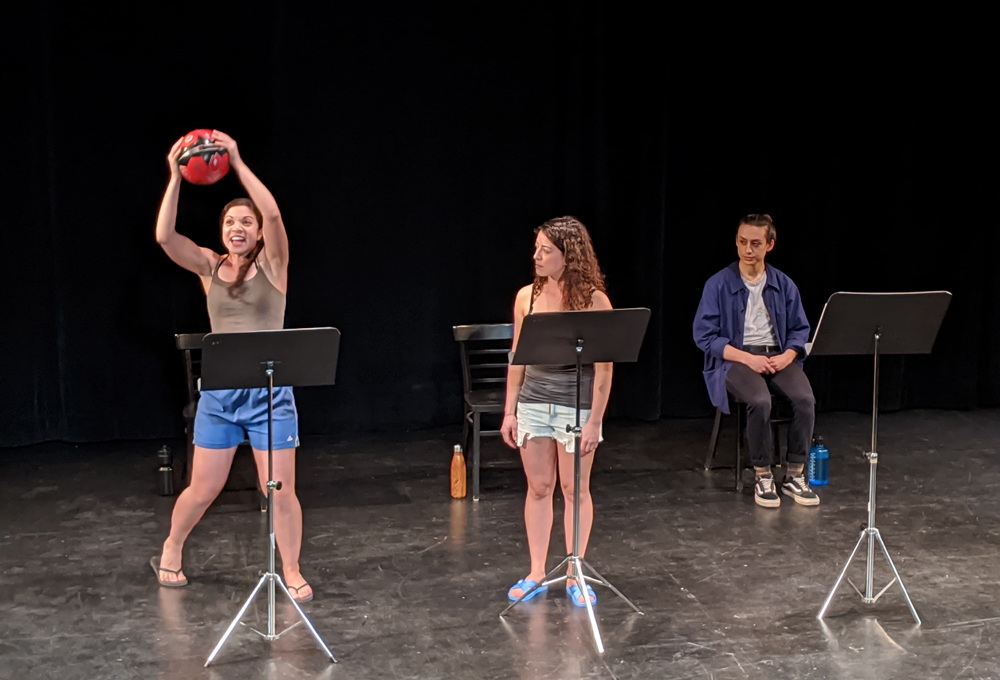 Staged reading of When We Grow Up. From left to right: Camila Fitzgibbon, Mariana Tyler, and Gabe Mahrjan.

Celebrating its 40th anniversary, Geordie Theatre is presenting its annual festival virtually, via Zoom, from Feb. 3 to 6. Every year, the festival highlights two English plays, one for elementary school students and one for high school students. This year, plays called The Little Mighty Superhero and Celestial Bodies will headline the festival.

“It’s an adventure piece for young people that centres around this boy who is trying to reconnect and remember the stories and traditions that were passed down to him from his Lola  (grandmother) because he’s starting to forget,” says Geordie Theatre Director Mike Payette.  “Especially during this time, it’s a piece that speaks about loss and grieving but through a young person’s perspective.”

Celestial Bodies, by National Theatre School graduate Jacob Margaret Archer, is a solo show aimed at high school kids. It’s about a teenage girl, Stella, who is navigating her way physically and emotionally through the world around her, and is just trying to fit in.

The Little Mighty Superhero will play at noon on Feb. 6 and Celestial Bodies will play at 5 p.m. on Feb. 6. Both shows will be live streamed, so they will only be available at the time of the screening. Tickets cost $11.50 per household. The actors will be talking to the audience about the show beforehand and will have a 10-15 minute talk-back, where the audience can ask questions. Both shows are 50-minutes long. The audience will be capped at about 90 households per show.  Ticket purchase will include a pre-show theatre workshop, where students will learn about how to be a good storyteller or create interesting characters.

The Geordie Theatre, in collaboration with the National Theatre School of Canada, will also present two stage readings, which means the actors read the script rather than perform on a set. The stage readings, written by National Theatre School students, are scripts of plays that have yet to be produced and are presented exclusively to schools. The goal is to expose students to theatre and get their feedback on the playwrights.

“Everything that we do supports and fosters young people and their voices so that they feel empowered in this world, and they see stories that reflect their reality,” Payette says. “At this stage of their [script progress], it’s really necessary to get authentic feedback from the audience so that it can benefit the playwright. It’s supposed to invite audiences into young artists development and it’s also to support artists and playwrights.

The first staged reading will take place on Feb. 3 with The Borrowing Man by playwright Sarah Currie. This play is about three teenage girls who try to follow an internet ritual whereby a supernatural figure answers questions about their future. Each girl has to cope with the uncertainty of their future and questions about their friendships. The second staged reading is called Until Tenth Grade by Jena McLean, which will take place on Feb. 4. It is about teenagers who are dealing with finding their identities, dating and activism. Both staged readings are also virtual via Zoom this year.

The themes of the plays and the readings are relevant to kids at this time. Payette says the goal is to have family-oriented programming so theatre can be used as a tool to help parents form a dialogue with their kids about these issues. “It’s about using theatre as a tool to inspire and create confidence in young people, so that they can be the leaders that they deserve to be in the future,” he said.

Under normal circumstances, the Geordie Theatre School offers  year-long courses and workshops to more than 300 kids and teenagers in Quebec so they can explore the world of theatre. The school offers a winter session where kids can learn how to create characters and write a script, then perform them in front of an audience. Because of the COVID-19 pandemic, all courses are currently being offered online.

For more information on the festival or on their theatre school, click here.

Sleepaway camps can open this summer

If your outdoor play space is a few squares of sidewalk, your…