In a world where entertainment for children grows ever more flashy — think 3D movies and fast-paced video games — it might seem like live theatre on a simple stage wouldn’t hold the attention of young audiences. But year after year, families discover that plays weave a magical spell unlike any other art form as the myriad of characters come alive on stage.

In Montreal, Geordie Productions has been presenting theatre to audiences of all ages for more than two decades, developing a loyal following of families who know there is magic to be found when the curtains rise and a play begins.

This year, Geordie’s series of three mainstage plays kicks off at the Centaur Theatre on October 11 with Antoine de Saint-Exupéry’s The Little Prince. Artistic Director Dean Patrick Fleming says the story, which explores how love and friends are more important than money and power, is as relevant today as it was when the book was published in 1943. Audiences will watch as the Prince meets a pilot who has crash-landed on a different planet. They learn about each other’s worlds, learning important life lessons along the way (such as the famous “one sees clearly only with the heart”). The play is geared towards children ages 8 and up. 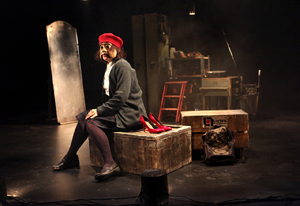 In February, the show I, Claudia brings theatre goers ages 11 and up into the world of a teen who is facing the challenges of puberty, unpopularity and her parents’ divorce. The one-woman show has the lead actress using four different masks to create characters ranging from the adolescent heroine to a school janitor.

In late April, Pinocchio, the classic tale of a wooden puppet who wants to become a real boy, will come alive for audiences ages 6 and up. Through his various adventures, Pinocchio learns about the importance of taking responsibility for his actions. The puppet’s ability to make mischief will delight youngsters who are eager to grow up but not quite sure if they like the responsibility that “being big” entails.

In addition to its three plays, Geordie is once again offering touring plays to schools. This year, they are presenting A Thousand Paper Cranes, the story about a young girl who is diagnosed with leukemia after the Hiroshima bombings. Geordie has created two different versions of the play, one for elementary school students and the other for high school and CEGEP students. The play for younger children focuses on how the main character, 11-year-old Sadako Sasaki, turns to her friends when illness strikes. The play for older students explores more of the history behind the decision to drop a nuclear bomb on Hiroshima and the devastating consequences.

The Mainstage productions take place at the Centaur Theatre, 453 St. François-Xavier in Old Montreal. For more information, call (514) 845-9810 or go to www.geordie.ca.