Aimed at youth 12 to 18, the game (in French only) addresses the notions of rights and freedoms, the resulting obligations, and the intervention power of people in a position of authority.

The tabletop game can be used in three ways: players can use it to bond with others, as a way to raise awareness, or to aid those who have been exposed to discriminatory profiling.

All cards in the game — citizen, authority, and element — are deliberately ambiguous to let each player interpret them freely according to their own perceptions. The kit contains activity sheets presenting the rules of the game, as well as instructions for the people who will lead the game. One of features is a self-paced approach that allows players to reflect and learn while navigating through the stories.

There is game board and 48 cards that can be downloaded from the website and printed out using the instruction kit. The game is for 3 to 10 players and lasts between 30 minutes and an hour. 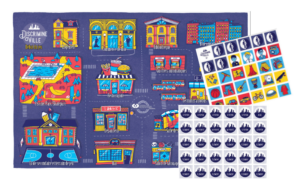 Previously tested with a few youth centres and organizations, the game ignited the enthusiasm of participants because it allows for discussions on important issues and the learning of concepts related to human rights in a fun context.

To download the game and the animation kit visit cdpdj.qc.ca/discrimineville

About the Human Rights Commission

The Human Rights and Youth Commission (Commission des droits de la personne et des droits de la jeunesse) ensures the promotion and respect of the principles set out in the Quebec Charter of Human Rights and Freedoms. It also ensures that the interests of children are protected and that their rights recognized in the Youth Protection Act are respected and promoted. In addition, the commission oversees compliance with the Act respecting Equal Access to Employment in Public Bodies.

World Children’s Day was first established in 1954 as Universal Children’s Day and is celebrated each year on November 20 to promote international togetherness, awareness among children worldwide, and improve children’s welfare. It is also the date in 1989 when the UN General Assembly adopted the Convention on the Rights of the Child.