Home / April 2018 / Four ways to celebrate books with your kids 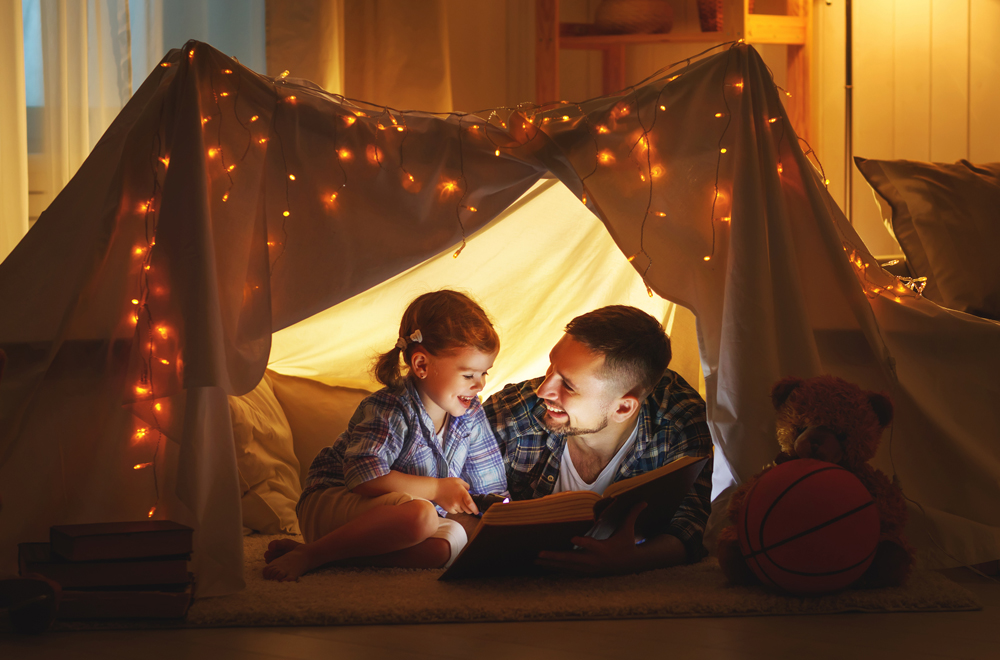 There is no better month to celebrate the pleasure of reading than April. Not only is April 2 International Children’s Book Day but April 23 is World Book Day. Books represent an important part of childhood and the ones children read when they are young set the foundation for their path towards learning and discovery.

This April, make sure to carve out time with your child to appreciate the many wonderful books that make up the diverse, imaginative and touching range of stories that can be found in the vast compendium of children’s literature.

Here are four ways to celebrate children’s literature with your child.

In our digital age, we can easily neglect the wonder of books, and one of the best places to develop a profound love and appreciation for them is at the library. Libraries are a gift and resource to our communities and they can foster a true love of reading in children. There is nothing as magical as being surrounded by thousands of books, all of which can be borrowed for free. This April, make it a point to visit some of Montreal’s libraries with your children. You can go to your local neighbourhood branch or check out a new one like the Montreal Children’s Library in St. Michel or the Bibliothèque Nationale in the Latin Quarter. Most libraries have activities for children, such as storytimes or crafts inspired by books that make for a fun, positive introduction to reading. Make sure to browse the library’s collection of titles by local and Canadian authors. You will find a rich treasure trove of books that reflect our unique Canadian landscape. Seek out books by great Canadian authors and illustrators like Marie-Louise Gay, Julie Flett, Kyo Maclear and Robert Munsch for younger children, and Kit Pearson, Tim Wynne-Jones and Monique Polak for the older ones.

2. Treat your child to a new book

Despite the rise in popularity of e-books and online reading, there is no substitute for flipping through the pages of an actual book. This month is the perfect time to go to the bookstore and let your child pick out a new book to add to his or her collection. It might become their latest addictive read or new favourite bedtime story. There are many great just-released titles to pick from. In picture books, acclaimed Dominican-American author Junot Díaz has just released his first children’s book, entitled Islandborn. It is about a little girl named Lola who pieces together memories of her homeland, which she left as a baby, through stories told by her grandmother and other family members. Hello Hello by Caldecott-winning illustrator Brendan Wenzel is an ode to the protection of the earth and its many endangered species. Town Is by the Sea by Joanne Schwartz is set in Cape Breton and gives a lyrical glimpse into life in a mining town where there are not many other prospects for the town’s inhabitants. A reflective read for young readers is Refugee, by Alan Gratz, which describes the journeys of three refugee children at different times in the last century due to conflict and persecution. For teens, fantasy writer Philip Pullman is back with La Belle Sauvage, the first book in his new trilogy The Book of Dust. Those who read his addictive His Dark Materials series will here find the prequel story to heroine Lyra Belacqua. And for teens who were enthralled by the Black Panther phenomenon, they will want to dive into Children of Blood and Bone, the first in Tomi Adeyemi’s Orïsha Legacy fantasy trilogy set in a West African-inspired world steeped in magic and the quest for justice.

Most of us have a favourite book from our childhood, so why not seek it out and share it with your child. There are so many great classics that have captured the hearts of young readers over the years and turned them in to life-long readers. There is Margaret Wise Brown’s Goodnight Moon, Green Eggs and Ham by Dr. Seuss, Where the Wild Things Are by Maurice Sendak, Antoine de Saint-Exupéry’s The Little Prince and Grimm’s Fairy Tales, just to name a few. Sharing an old classic or two with your children will provide them with the opportunity to discover books that have been loved and cherished by millions of children over the years and around the world, and for you to take a nostalgic journey down memory lane.

4. Read the book and see the movie

This is a fun way to see how stories can come alive in different ways. Seeing the movie version of a book helps to build the imagination as it provides a version of the story that might be different from the one that was conjured by the mind when reading the book. It can also reveal new layers of meaning than those captured during that first read. There are some great children’s books that have been or are being turned into movies lately. Deborah Ellis’ tragic and evocative story The Breadwinner, about a young girl in war-torn Afghanistan who sets off to find her father, has been transformed into an animated film that was released in November.  The much-anticipated film version of Madeleine L’Engle’s beloved novel A Wrinkle in Time, featuring Oprah Winfrey, Reese Witherspoon and other celebrities, is currently playing in theatres.

The comedic early reader book The War with Grandpa by Robert Kimmel Smith, about a boy who has to give up his room when his grandfather moves in and plans out some elaborate pranks to get back at him, has been made into a movie featuring Robert DeNiro that is awaiting release. The award-winning young adult novel Monster by acclaimed African-American writer Walter Dean Myers deals with some heavy topics as it traces the story of teenager Steve Harmon, who finds himself in juvenile detention after a botched robbery. The film adaptation of the book recently premiered at the Sundance Film Festival and should soon be opening in theatres.