When Diane Groulx’s three children asked her for a dog last year, she wasn’t sure if the family was ready to commit the time, energy and responsibility needed to raise and care for a pet. Instead, Groulx proposed that her family foster a dog from the Mira foundation, a local organization that trains dogs to help people with special needs. Groulx had heard about the program through friends and thought it was a good way to have a pet on a temporary basis while helping others. With the whole family on board, they became a foster family to Baltique, a black Labrador retriever puppy who was destined to become a Mira guide dog.

There are two organizations in Montreal who train dogs to help people with special needs. Founded in 1981, Mira provides service dogs not only to people who are visually impaired but also to those with physical disabilities or autism spectrum disorders. Last November, a new organization called PACCK was created with the goal of training dogs to help children between the ages of 2 and 12 with pervasive developmental disorders, such as autism.

Because these dogs don’t start their specialized training until they are more than a year old, they need to be cared for in the first 12 months. While Mira and PACCK provide the veterinary care and dog food, foster families are expected to take good care of the puppies, mostly treating them like an ordinary pet. The dogs should be taught to come when they’re called, sit, heel, not jump up on people, etc. To help dogs acquire such skills, Mira and PAACK rely on people like Groulx to become foster families, who agree to take a puppy for a year to 18 months.

Foster families are also asked to socialize the dogs. While pet dogs are routinely left alone for eight hours or more when their owners are working, a Mira dog should not be home alone for more than four hours at a time.

Sylvie Baillargeon, the coordinator of Mira’s foster family program, explains that dogs that are left on their own become used to being alone, but “working” dogs can’t ..be allowed to .become too independent. Since these dogs are around people all the time, they must be very attentive and attached to humans. Some foster families work out an agreement with their employers allowing them to bring the dog to work.

Part of socializing these dogs also means taking them out into the world. Mark Stolow, executive director of PACCK, explains that in order to stimulate the animals socially and habituate them to as many different environments as possible, the dogs need to be exposed to public places such as stores, restaurants, movie theatres, buses, metros, and busy downtown streets.

“I take Baltique with me everywhere I go,” Groulx says. In fact, Baltique spends so much time at her local post office, he’s become its unofficial mascot. She also brings him to cafés and on some shopping excursions.

Another responsibility that foster families assume is to bring the dog to Mira’s headquarters in Ste. Madeleine (about an hour from downtown Montreal) or PACCK’s training centre in Hemmingford (40 minutes from Montreal) on a regular basis for the first few months. These visits allow the foundations to provide veterinary care, replenish the supply of dog food, track the dog’s progress, and offer advice and support for any basic training or behavioural issues the family may be concerned about.

During such visits the dogs are evaluated by trainers to see exactly what kind of work or which client the dog is best suited for. Because of his great capacity for learning, Baltique was chosen to become a guide dog for a blind person, which, Groulx has been told, requires the most training. Groulx is expecting a call from Mira any day asking her to bring Baltique back for good.

This is the toughest part of fostering dogs, having to give the dog back after everyone has become attached. But according to Baillargeon, many Mira foster families do it again and again. She says 30 to 40 per cent of foster families come back for another dog, and she’s even seen young adults, whose parents fostered dogs when they were kids, come to Mira to do it themselves.

In fact, since finding out that Baltique is ready for guide dog training, the Groulx family has made a new commitment to Mira by fostering a gestating female. Groulx says “Dolly” looks just like Baltique and since Dolly will be breeding dogs for the program instead of working, she will be with the Groulx family on a more permanent basis.

“For sure it’s going to be hard for me and the kids to say goodbye to Baltique, but the fact that we have Dolly helps,” says Groulx. “And much as we’re sad, we’re just as happy and proud that he’s been chosen to do an important job and that he will help someone.”

Groulx says the experience has given her family much more than the chance to try out having a dog. It’s given her children an opportunity to learn a sense of responsibility from taking care of the dog’s needs. And the fact that it isn’t really their own dog has opened the children’s hearts to the act of generosity involved in caring for and loving an animal for someone else’s eventual benefit. 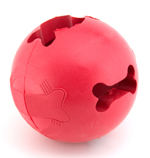 If you would like to try fostering an animal for a shorter time, check out these programs:

The Montreal SPCA uses foster families for cats and dogs. Most of the dogs that need fostering are being treated for kennel cough, which is highly infectious among canines but doesn’t pose a risk to people or other animals. These dogs need a home for approximately two to six weeks. For more information, call (514) 735-2711, ext. 2237 or go to www.spcamontreal.com

Gerdy’s Rescues and Adoptions needs foster families to care for cats and dogs that are waiting to be adopted. Fostering keeps the animals out of cages and saves the organization the cost of boarding. These fostering commitments can range from three days to a couple of months. For more information, call (514) 203-9180 or go to www.gerdysrescue.org

For more information about the PACCK puppy raiser program, call Zoë Quinn-Phillips at (514) 876-8888 or go to www.pacck.org