Fairy tales are some of the oldest known children’s stories and they have gone on to inspire a rich tradition of storytelling for children. For a while, however, they fell out of favour. Perhaps it was due to Bruno Bettelheim’s psychological deconstruction of these classic stories in his book The Uses of Enchantment: The Meaning and Importance of Fairy Tales, in which he suggests that fairy tales have a far darker side. It could also be because the traditional roles of men and women put forward in fairy tales began to be questioned, or that Disney began to sugarcoat the stories to make them more palatable.

But as the saying goes, “Everything old becomes new again,” and fairy tales are currently undergoing a revival. From television shows such as Once Upon a Time and Grimm, to new movies like Snow White and the Huntsman, fairy tales are being discovered by a whole new generation.

Not surprisingly, they are also making a comeback in children’s literature, with some traditional and non-traditional re-workings popping up on bookstore shelves. This provides us with an important reminder of the great influence fairy tales have had on nearly all stories written after them. 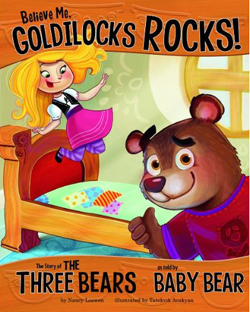 They say there are two sides to every story and in this series of picture books, classic fairy tales are told from the perspective of someone other than the main protagonist. For example, in Seriously, Cinderella Is So Annoying, the wicked stepmother describes a very different version of the gentle young lady that readers have been exposed to. Or in Believe Me, Goldilocks Rocks! Baby Bear is given his own turn to explain that Goldilocks was actually not the greedy girl who plundered everyone’s oatmeal, as she has long been made out to be. The stories are quite short and are easy to read, but give children the opportunity to understand that people have different views of events and opinions of others. These books are a great way to introduce a discussion on empathy and understanding. The colourful and cartoon-like illustrations also break with tradition with regard to the art used in traditional fairy tales. 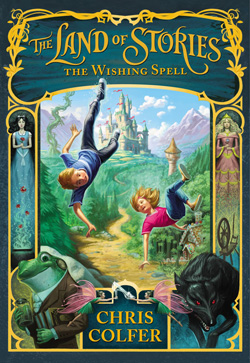 Chris Colfer is best known for playing Kurt Hummel on the television show Glee, but this summer this talented actor just released his first novel for children. It is the story of very different boy and girl twins Connor and Alex, who recently lost their father in a car accident. Their mother must work long hours to make ends meet and when she must work on their birthday, their grandmother stops by and gives them what appears to be a book about fairy tales. The book begins to exhibit strange behaviour, glowing and humming and, when the twins inspect it more closely, they fall within its pages.  They are suddenly plunged into the Land of Stories; an alternate world composed of many different fairy tale kingdoms. They encounter nasty trolls, distraught fairies and some famous princesses, such as the Little Mermaid and Sleeping Beauty. They learn that the only way they can get home is by finding the ingredients for the Wishing Spell; however, Snow White’s stepmother has escaped from prison and will stop at nothing to get the spell before the twins do. This action-packed and heartfelt novel takes readers on a fast-paced adventure that will have them gasping at every twist and turn. They will encounter most of the well-known fairy tale characters, and will be highly entertained by discovering what happened to these famous characters after their stories came to an end the first time around.

Fairy Tales from the Brothers Grimm: A New English Version
(Viking Books, $29.50) by Philip Pullman – Ages 14 and up 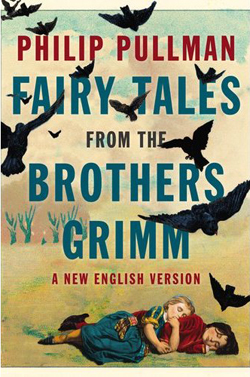 British author Philip Pullman has just released a new version of 50 fairy tales by Brothers Grimm in celebration of the 200th anniversary of the publication of their first volume of stories.

Pullman is an appropriate choice to take on this task. His highly thought-provoking series His Dark Materials, gained as much popularity among adults as it did with teenage readers, much in the same way classic fairy tales are almost more suited for adults due to some of their frightening themes.

Pullman covers such classics as Cinderella, Hansel and Gretel and Rapunzel, but also includes some lesser-known stories such as The Three Snake Leaves and Donkey Cabbage. In a recent article, Pullman said, “I didn’t want to put them (fairy tales) in modern settings, or produce personal interpretations or compose poetic variations on the originals; I just wanted to produce a version that was as clear as water.” Pullman does exactly this, modernizing the stories purely in language, resisting the temptation to add details. By leaving the stories in their purest form, he shows how the Grimm Brothers left so much room for interpretation and re-interpretation, inciting the reader to find hidden meanings in the shadowy events of these simple, yet delightfully mysterious stories. Young adult readers who grew up on many of these stories will be very amused by this book, delving into the stories as they were originally intended but in language they will have no problem understanding.