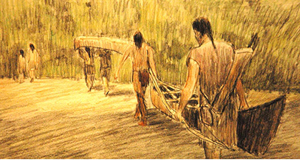 The stories of the Abenaki First Nation and the history of the Irish, Scottish and French European settlers are inextricably intertwined. N.D.G. visual artist and musician G. Scott MacLeod explores this connection in his recently released four animated films that make up a box set called The Water of Life.

The films are inspired by the historical fiction of Irish storyteller and historian Mike Burns. One night, MacLeod saw Burns perform at the Hudson Village Theatre where he told the story of Murdo MacLeod, a Scottish immigrant who makes contact with the Abenaki people. Moved by the tale, MacLeod and Burns collaborated to make it into a film. The Saga of Murdo MacLeod and His First Contact with the Abenaki, one of the four instalments of the story, was released in 2012 and features MacLeod’s animations.

“This is an exploration of who we are as a country,” MacLeod said. He added that the history of First Nations in Canada has been largely ignored in the education system for many years, and that only recently have their stories been incorporated into the curriculum.

Each film tells a different story, featuring the tales of Irish and Scottish immigrants, French Canadian and Abenaki people. The series was funded in part by the National Film Board of Canada. 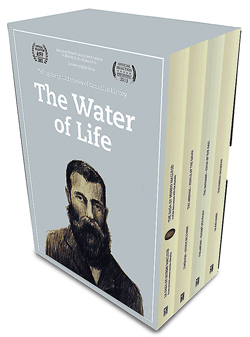 ​MacLeod has also created educational resources that can be used to facilitate class discussions. For example, there are questions students can ponder before watching the films, after the screening as well as suggested follow-up projects. These resources come as special features in the DVD box set, but can also be downloaded free on The Water of Life website.

“This is a good entry point for students to learn about these groups,” he said. “In order to have reconciliation, we need to have truth.”

MacLeod just released his latest short film First Contact: which chronicles the story of the Viking encounter with the Beothuk people of Newfoundland. Other future short films are in development, one about the history of the English in Quebec and another about an American traveler.

The series was also made into a full-length film that was screened at several film festivals in the Netherlands and Canada. The four-part box set is available for purchase online by individuals or teachers who would like to use them as educational tools.

For more information or to purchase the set, visit thewateroflife.ca.

Having two kids with a five-year age gap, it can sometimes be…

Ready to get out of the city for a while? Head to…