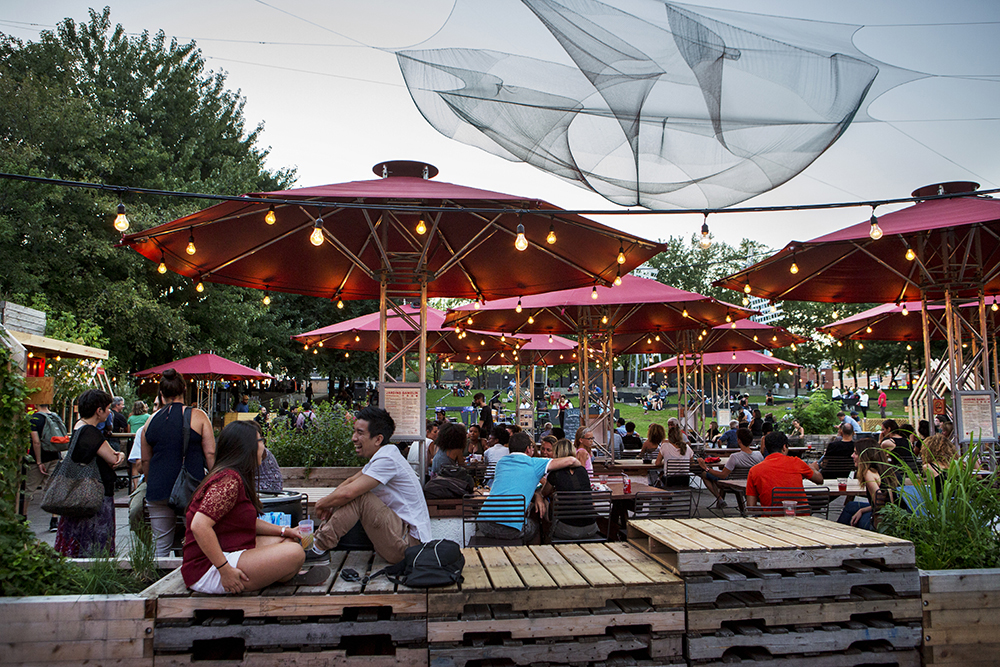 There is an outdoor space downtown Montreal that comes alive in the summer and beckons families from far and wide with various kid-friendly activities.

Located in the eastern part of downtown are dozens of indoor and outdoor entertainment venues including Place des Arts, museums, installations and restaurants known collectively as Quartier des Spectacles. For the past two summers, the area bordered by St. Hubert, City Councillors, Sherbrooke Sts. and René-Lévesque Blvd., has included a plush, urban, green space with restaurants and a terrace adjacent to an open grass area and hill.

The space, known as Jardins Gamelin, will host several free daily events for the whole family. Your first stop for kid-friendly entertainment should be La maison jaune. At the game library, located in one of many repurposed shipping containers on the grounds, there will be creative workshops and performances every Sunday in May and June from 9:30 a.m. to 11 a.m. Children of all ages are welcome to participate in the performances, known as family mornings with Petite bonheurs, that will include dancing, singing, music, theatre, puppetry and more.

Meanwhile, teens and adults can hang out at the Randolph game club, where they can compete in skill, strategy or role-playing games every Sunday from 2 p.m. to 7 p.m. The game club will also host trivia nights on Sundays from 7 p.m. to 9 p.m.

Get your child involved in some of the Jardins’ artwork by paying a visit to local comic book artist Cyril Doisneau, who will be hanging around the outdoor space all summer long.

In between activities, kids can play with board games and giant Jenga pieces or have a game of ping-pong. In July, acrobats and circus artists will perform live on weekdays.

You can also bring your kids to the BAnQ dans les Jardins Gamelin workshops, where librarians and archivists will share different collections that have to do with music, film, art, literature and youth literature as well as Quebec history every Tuesday from 11 a.m. until 2 p.m.

There will be several special events at the Jardins, including three outdoor movie nights featuring popular Quebec films. The first film, Ça sent la coupe will be screened on Sunday, June 11 at 9 p.m. On June 2, children of all ages will be able to dance with the National Ballet School and perform in recitals starting at 5 p.m.

At the site, the BallPark snack-bar serves everything from salads to homemade burgers and fries, and also features a new kids’ menu as well as a dairy bar for those who have a sweet tooth. The restaurant will also serve breakfast on the lawn every Saturday and Sunday from 10 a.m. to 2 p.m. The snack-bar will be open weekdays from 11 a.m. to 11 p.m. and weekends from 9 a.m. to 11 p.m.

You can access Jardins Gamelin by either the west side of Berri St. or the east side of St. Hubert St. The closest metro stop is Berri-UQAM.