Down syndrome dolls are an Internet hit

Walk down the doll aisle of any toy store and you’re likely to see dolls of both sexes and many different ethnicities.

But, as 9-year-old Hannah Feda discovered a few years ago, “There’s no doll that looks like me.”

Hannah, now 13, has Down syndrome. She grew up surrounded by dolls that resembled her five siblings. Her mom, Connie Feda, figured there must be dolls that look like kids with Down syndrome, but after months of searching online, she couldn’t find a doll that portrayed kids with Downs in a flattering way. So she set out to make the dolls herself.

After contacting a doll sculptor and a manufacturer, Feda set up Dolls for Downs, initially thinking she could sell 250 online. Barely three years later, she’s already sold out her first order of 1,000 dolls and is taking preorders for the second batch of 1,000. Orders have come in from a dozen countries, including Brazil, Australia and Greece. “It has been much more vigorously embraced from many more vantages than I expected,” Feda says. 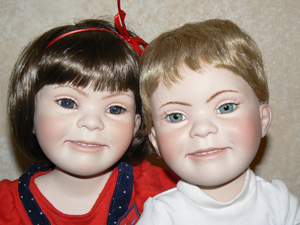 The 18-inch dolls, which sell for $75 (US) plus shipping, have almond-shaped eyes, a flattened facial profile and even an optional chest scar to reflect a common surgery some children with Down syndrome have. There are 12 different girl dolls and six boy dolls, each with a name and a story.

However, the dolls are not without detractors. The former head of the Canadian Down Syndrome Society, Krista Flint, spoke out against the dolls recently, saying they stigmatize children with the condition and promote the stereotype that all of those with Down syndrome are alike.

The current executive director of the organization, Kirk Crowther, said that while the Canadian Down Syndrome Society supports families who decide to purchase the doll for their child, he worries that the dolls send the wrong message.

“There is an assumption made by the public that all people with Down syndrome look the same, they all have the same abilities, when really they’re just like the general population. Every person is different and they certainly want to be treated that way.”

Feda dismisses this logic, saying all dolls are the same to some extent.

“All Barbies are the same. All Kens are the same. What we’re hoping to do is take that sameness and make it less threatening and have people be more accepting of it,” she says.

They aren’t only for kids with Down syndrome, Feda says. Her first order was from a family who had a friend with Down Syndrome. They wanted a doll who would look like their friend.

Feda adds that the dolls may be used in a therapeutic way, helping teach kids with Down syndrome how to tie laces, fasten buttons and do up zippers. It’s for this reason that the National Down Syndrome Society in the U.S. supports the project and several therapists have ordered dolls and intend to use them with patients, she said.

Asked why no one has seized this specialized market before, Feda says it’s too small and specialized to motivate the big toy companies.

“I like to think that because I’m somebody’s mother and not some marketer, that makes my dolls more attractive,” she says.

For more information on the dolls or how to order them, visit www.dollsfordowns.org.