Don’t freak out over report cards

It was a brilliant moment. Happily holding court for reporters and camera crews who came to interview him following his Nobel Prize win in medicine in the fall of 2012, Sir John Gurdon began quoting from the school report card that branded him a failure at 15.

His former biology teacher at Eton College in England had assured his parents that young John’s ambition to study science was “quite ridiculous” and “a sheer waste of time, both on his part, and of those who have to teach him.”

A lifetime of judgment heaped on the work of one school term. Pack it in buddy, go learn underwater basket weaving, why bother with science and genetics and cells, you haven’t got it in you.

The lesson we can all take from this is that maybe we shouldn’t freak out too much if our children don’t receive fabulous marks on their report cards. They are not a life sentence; they are a snapshot taken at one particular moment in time.

Remember what they’re really about: they evaluate – in one person’s fairly subjective opinion – not necessarily how brilliant your child is, how good at math, or French grammar, but how well your child might meet a specific criteria set by a government bureaucrat.

Sometimes, all it tells you is whether your child can sit still in class or follow the rules. Other times, what it picks out as a failing might, in fact, end up being the key to their success, as in this other comment from Gurdon’s report: “He will not listen, but will insist on doing his work in his own way.” 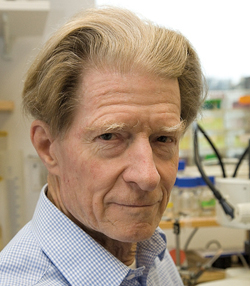 As it turns out, before Gurdon’s cell research led the way to cloning and stem cell research, his ideas took a long time to be accepted because he didn’t follow the scientific pack. His work, done in his own way, contradicted previous studies by older, more established scientists.

Let’s remember, too, what those evaluations aren’t geared to tell us: how creative or how socially conscious your child is, or especially – how well they will do once they leave school.

As Malcolm Gladwell wrote in his bestseller Outliers: the Story of Success, the people who do best in life, professionally or financially, aren’t necessarily the ones who get the highest marks and most glowing report cards. And the smartest people out there aren’t necessarily the ones that do best in school, either. There’s so much more involved: sheer persistence, for one thing. He repeatedly refers to his “10,000-hour” rule, that those people who do succeed in any given field generally have practiced something for a total of about 10,000 hours.

But alas, we can’t seem to let go of our obsession with judging and ranking our children. From their first visits to the doctor when their length and weight are charted to their first milestones: sitting up, crawling, walking, talking and potty training, we check up on them, analyzing their achievements and comparing them with their peers. Are they where they should be developmentally? Are they able to stack the appropriate number of cubes? Now that they’ve started speaking, have they hit the 20-word vocabulary mark? Okay, great, they got an 83 in math, but what’s the class average?

Ask around: lots of people have funny report card stories. One of my favourites is from a friend who remembers being reprimanded for doodling too much, and for her overly flamboyant penmanship. She’s now a graphic designer/special effects artist. 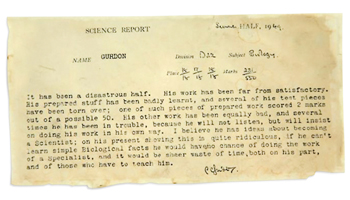 There’s one other notable thing about Gurdon’s report. He decided to keep it. Framed it, in fact, and hung it in his office. Apparently, it’s the only thing he ever has framed.

Sometimes the reality of a bad report card can be a bit of a wake-up call, or an inspiration to prove others wrong.

His take on it now? “If someone is really interested in a subject he should be encouraged to go on with it, work at it,” he told the CBC radio program Quirks and Quarks. “Even if some schoolmaster thinks that he’s not very good at it.”