Do you ever complain you feel tired? You might think twice after reading this story. Sarah Desormeaux is a Montreal mother of four who breastfeeds her three-month-old child every four hours. After she is finished, she pumps her breasts for half an hour and puts the surplus milk into sterilized bottles to give to babies whose mothers can’t nurse.

When she was breastfeeding her other children, Desormeaux would often throw out her milk because she produced more than needed. But after giving birth to her youngest child, she found a way to put this extra milk to good use. In fact, her surplus milk can save lives.

The milk is mainly fed to premature babies who have a high risk of getting necrotizing entercolitis (NEC), which occurs when tissue in either the small or large intestine is damaged, and parts of the tissue die. This can cause inflammation of the intestines and, in rare cases, perforation of the intestine. If this occurs, waste can enter the baby’s bloodstream and abdominal cavity, which can be life threatening. Babies born prematurely have underdeveloped organs, which put them at risk for other diseases and infections.

When a woman gives birth to a premature baby, either vaginally or by C-section, it can take at least three days for the mother to begin producing breast milk. In the past, this meant that these babies were fed formula. According to HÉMA-Québec, the risks of a child developing NEC is 3.3 times more likely if he/she is fed formula during these initial first days because it is more difficult for a baby to digest.

Now hospitals with access to the bank can feed these babies right away with donor milk, and switch to the birthing mother’s milk when it comes in.

In Canada, one in 12 babies are born prematurely, according to the Canadian Premature Babies Foundation (CPBF). More newborns die from complications arising from premature birth than any other cause, according to the foundation. Programs like HÉMA-Québec’s can mean the difference between life and death for some preemies. 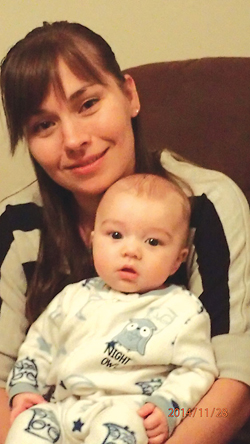 For Desormeaux, choosing to donate was something she felt good about.  “I think that it’s important if it helps little babies,” she said. “It’s a great idea, but it all depends on the person. If you can do it, hats off to you. But if it’s too much, you have to take care of your baby first before helping others. ”

Before donating, Desormeaux had to answer a questionnaire and have a blood test. Once she was deemed to be a good donor, she began collecting her milk. Every week, she freezes about 100 bottles of breast milk, each containing 100 mL.  At the end of the week, she calls HÉMA-Québec, and a carrier comes to her home to retrieve the frozen bottles, which are transported in boxes containing dry ice.

HÉMA-Québec then defrosts the milk and combines it with the milk of three other mothers. It is then pasteurized and frozen a second time before being distributed to hospitals. According to Laurent-Paul Ménard, spokesperson for HÉMA-Québec, this milk is combined so that it will be well balanced in terms of nutrients.

According to HÉMA-Québec’s current criteria, once a baby is past the 34-week mark, they can no longer have access to the milk bank.

Mireille Béchard, a lactation expert at the Montreal Children’s Hospital, says she hopes that eventually all babies who need it will have access to mothers’ milk. “It’s a question of quantity,” she said. There needs to be enough milk. And since the project is just beginning, the babies who need it most are being prioritized.”

How to become a donor

• Women who fit the right profile must complete a questionnaire and meet certain criteria, such as being able to produce surplus milk, be non-smokers and healthy.

• The qualification process includes a telephone interview and a blood test.

• Once a woman has been approved, she can begin collecting and freezing her milk.

• The frozen milk is sent to HÉMA-Québec at regular intervals.

• The milk is biochemically tested and pasteurized to eliminate viruses and bacteria. It is tested a second time and stored in a freezer. The milk is then sent to hospitals, where it is fed to extremely premature infants.

How to know if milk is “safe”

• A sterility test is performed on the milk after pasteurization and before freezing to ensure that the product is free of microbial contaminants.