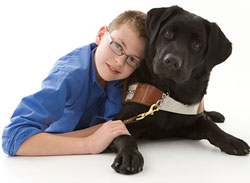 Stephanie Larose never really liked dogs but she was more than happy to welcome one into the family when she found out it might help her 11-year-old son, Victor. In 2009, he was diagnosed with Pervasive Developmental Disorder (PDD), Attention Deficit Hyperactive Disorder (ADHD) and Pica, a condition where individuals eat inedible things, like dirt and hair.

Over the years, Victor and his family have lived with his many challenges, which include trouble sitting still, difficulty falling asleep and problems coping with his emotions. His mom was always keeping an eye out for new programs and therapies that might help her son — and the family — better cope with his conditions. One day, a friend told her about a research program that was looking at the effects dogs have on the stress levels of families whose children were living with a disability. She jumped at the chance to enrol Victor.

The program is run by the Mira Foundation, best known for providing guide dogs for people with visual impairment. In 2003, Mira began a research project to provide dogs to families who had a child diagnosed with PDD (autism is considered one type of PDD). Since then, 175 families have participated. The program was originally designed for children under the age of 10, but the age criterion has loosened up over the years and now also accommodates teenagers. Dr. Noël Champagne, Mira’s leading researcher and psychologist, is also considering expanding the program in the future for adults living with a cognitive disability.

Dr. Champagne has discovered that interactions with dogs significantly decrease the levels of cortisol (a stress hormone) in children. He notes that many autistic children find transitions, such as moving from home to school, very stressful. But having a dog with them seems to reduce those negative feelings.

Kwanzaa has a calming effect

Now, six months after the dog (Kwanzaa) joined their family, Larose has seen many positive effects. For example, Victor’s PDD means he has trouble balancing and holding on to utensils. “When we go to a restaurant, he has to eat with his hands and he can’t sit still,” she says. “People will look at him and think that there’s something wrong with the parents for letting a child behave this way. But if we make him sit still, we’ll all have a bad evening. That’s the price we pay to go out.” But having Kwanzaa at his side has calmed Victor, making eating out easier for the family.

Even Victor’s sleep habits have improved thanks to Kwanzaa. “He used to sleep with a weighted blanket because he’s hyperactive,” Larose says. “Now, when he can’t calm down, he takes Kwanzaa with him to bed and falls asleep playing with the dog’s ear.”

When Larose first considered getting a Mira dog for Victor, she worried that it would make him feel even more marginalized. “I told him that the dog will have a harness that says Mira on it and people will know he is handicapped. I asked him if he was ready to deal with that.” Victor’s response to his mom was: “I hope people will be more tolerant with my sometimes weird ways of being, knowing that I’m different.”

In fact, since he acquired Kwanzaa, Victor has become an ambassador for the Mira organization. The program is still new, and people approach him with the assumption that he is training the dog for someone else. Victor never tires of explaining.

“No, I am not training the dog,” he will say. “I’m handicapped and this is my dog. I’ve got Pervasive Developmental Disorder — it’s like autism but not quite. That’s why I have my dog. It helps me deal with my emotions.”

Victor is also helping Mira raise money so that other children like himself can get a dog. Each animal costs the foundation close to $2,000. Victor has already raised half of that amount by collecting used printer cartridges and cell phone batteries that the foundation sells to raise money. “He tells everybody ‘I have the most expensive dog there is!’” says Larose, laughing.
For more information on Mira’s new program, visit http://www.mira.ca.

Through a program called Schola Mira, the Mira Foundation offers families workshops and classes on developmental delays. Organized by psychologist Dr. Noel Champagne and clinical director, Marie-Pierre Leblanc, the program is geared towards families with a child up to age 5 who is newly diagnosed with autism or Pervasive Developmental Delays. Parents, family members, caretakers and even friends can sign up and choose the services they want. Classes are conducted in groups of up to 10 people.

The classes are free, and Mira is currently accepting applications. For more information, call (450) 795-3725 or visit www.mira.ca (click on Schola). Applications can be downloaded directly from Mira’s website.