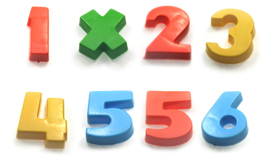 Math can be a tricky thing, especially for a child. Struggling with a basic concept can lead to a domino effect of confusion, since the next lesson will be more difficult when directly related.

When it comes to learning, all children are different. So how can parents make sure that their child is on the right track?

The Numeracy Screener, a free test that is available for download and only takes two to four minutes to complete, can help parents determine whether their child needs some extra help in math. This test is aimed at students from kindergarten to Grade 3.

The test was PhD student Nadia Nosworthy’s thesis, and was supervised by Dr. Daniel Ansari in the Department of Psychology at Western University, in London, Ont. The Numeracy Screener tests children in two different components of math: symbolic (for example, which is larger, 1 or 7?) and non-symbolic (which box contains more dots?).

Evidence has shown that a child’s ability to understand quantities, both symbolic and non-symbolic, is related to their current and future math skills.

“We’d been researching children’s early number skills for a while now, and we were very interested in finding good measures of individual differences in children’s basic foundational skills,” Ansari said. “We’d been using computerized measures for a long time and they had revealed to us that a child’s ability to judge which of two numbers is larger was predictive of their early arithmetic skills.

“We ran an initial study with about 160 students from Grade 1 to Grade 3, and we were able to show that indeed the measure, just like the computerized measure, highly correlates children’s early math skills.” 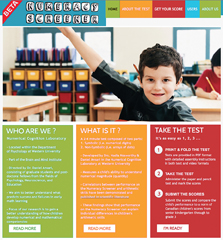 Since then, the team has collaborated with the Toronto District School Board and tested more children. Once a child takes a test, their results are compared to those of all the children who have taken it (658 children in total – 282 in kindergarten, 187 in first grade, 103 in second grade and 86 in third grade). The website then generates a norm, or percentile, which indicates how well the child did compared to others. This norm depends on the age of the child; an older child would, on average, do much better on the test.

Ansari hopes to open up the test to students both younger and older.

“Like with most things in learning and education, the earlier you can identify a potential problem, the better, especially in math, where everything is cumulative and early differences can lead to later problems,” Ansari said. He added that they’re also hoping to use the test with younger children to see if it will be effective at the prekindergarten level, as well as with fifth graders.

It is important to note that this test is simply a screener and cannot detect learning disabilities. “It is not a diagnostic test, but it can give you some indication of whether you might want to run some follow-up tests. It cannot categorize children into different groups,” Ansari said.

The test was created with developing countries in mind, which is why it is taken on paper. The team has been working with the Global Partnership for Education at the World Bank. The test has been used in Cambodia and Kenya and Ansari hopes that more schools and organizations around the world will use it. This would allow the team to create norms for different countries and possibly study the differences in results. For now, most of the results used for comparison on the website are from Canadian students.

“My dream would be that eventually you go onto the website and you can click the Peruvian norms, the German norms, the Canadian norms … We could have a cross-cultural test that would show the norms for different populations,” Ansari said.

To learn more about the Numeracy Screener or to download the test, visit numeracyscreener.org.