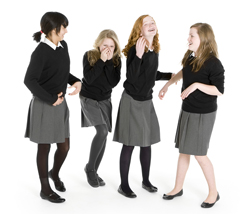 As the parents of three daughters, my husband and I have spent a lot of time thinking about how to help prepare our girls for the challenges and opportunities of contemporary life. These questions are particularly pertinent as we embark on the process of choosing a high school, this time for our youngest daughter.

It isn’t just academic success that concerns us, although that is certainly part of the equation. It’s also the harder-to-define factors that add up to lifetime success: things like resilience, self-discipline, confidence, and self-esteem. We want them to take an interest in the world around them, and give back to their communities. We want them to be kind to others and to stand up for themselves.

We worry about the social elements as well, since decades of research show a strong connection between teen girls’ life choices and those of their peer groups. Given that popular culture valorizes hyper-sexuality in girls and other risky behaviours, we’ve looked carefully for schools that counterbalance that with more positive alternative viewpoints.

We keep coming back to the same conclusion we reached four years ago, when we were looking for a high school for our twin daughters: an all-girls’ school. I’ve read a tremendous amount of research that indicates girls fare better on a variety of fronts, from self-esteem to academic achievement. But maybe more importantly than literature, we have been tremendously impressed with the positive experiences of our eldest daughters, who are now in Secondary III.

Want to know what helps set girls’ schools apart? Here is a quick overview of what we found:

Girls tend to do better in science, math and computers when boys aren’t around.

A 2010 study published in the Journal of Economic Perspectives suggests that girls in single-sex schools outperform their co-ed counterparts in the so-called STEM subjects (science, technology, engineering, and math). There are various hypotheses for why this may be so, including the notion that once they hit puberty, girls downplay their intellect when boys are around, or the fact that some girls may feel less comfortable asking questions or contri-buting to the conversation in subjects where boys have tended to dominate the conversation.

A researcher named Janice L. Streitmatter found that girls in single-sex classes were more inclined to take intellectual risks, speculate aloud on answers or feel comfortable being challenged on their thinking when boys weren’t around. Giving girls a safe space to develop intellectually during those critical formative years of adolescence helps give them the confidence to speak out in co-ed settings later on.  Streitmatter has written a book on the topic entitled For Girls Only: making a case for single-sex schooling.

Girls are more likely to engage with computers and technology in single-sex schools.

When we went to one recent open house at a co-ed school, our youngest daughter asked with interest about their robotics and computer programs. We walked into a classroom filled with kids, 95 per cent of whom were boys. Our self-confident little girl looked around and quickly decided this wasn’t a comfortable space for her. In a world where even Lego sets now come in pink and blue, girls can get the tacit message that things like engineering and computer coding aren’t for them. We’ve seen with our older girls that these so-called STEM subjects can be taught differently to appeal to diverse classes of girls, perhaps emphasizing creative solutions and brainstorming, or focusing on real-world, political, environmental or socio-cultural applications. A 2003 study found that girls from single-sex high schools were more likely than their co-ed counterparts to choose more math and science courses in college, and less likely to choose fields traditionally identified as “female.”

Girls tend to be kinder to each other in girls’ schools. 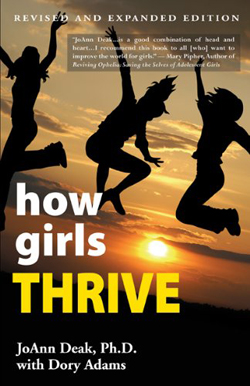 Contrary to popular belief, girls actually tend to be nicer to each other when boys aren’t around. There are obvious reasons for this, including the lack of romantic competition and less pressure to look attractive to boys.  But there is a less obvious reason as well. According to American author and neuropsychologist JoAnn Deak, when girls are together, it encourages the production of oxytocin, a hormone that encourages nurturing and caring. It’s the same hormone our bodies produce when breastfeeding, and it makes us feel warm and affectionate towards others. Deak is the author of How Girls Thrive.

There are a variety of reasons for this, including different learning styles (girls tend to have better developed language skills and are less openly confrontational in class discussions), interests and approaches to subjects. Boys overall have a tendency to be more disruptive in the classroom setting. Girls’ schools may also be more open to introducing more feminist concepts, role models and aspirations, which can be a tremendous motivation.

A 2002 study published in Sociological Perspectives noted that girls in single-sex schools reported a greater sense of safety and well-being in school than their co-ed counterparts.

Heterosexual girls in single-sex schools can focus better on the subjects at hand when their limbic systems aren’t kicked into overdrive by the cute boy in the back row.  Let’s face it, when faced with these adolescent sexual/emotional cues, the human brain has difficulty focusing on algebra, French or history.

All-girls schooling may not be the answer for everyone, but our research and family experiences have us quite impressed with what they can offer our daughters. While the girls will have plenty of occasions to socialize with boys outside school and in their post-secondary years, their high school offers precious opportunities to define their best, true selves during their critical teen years.

If you have an opinion about this topic, we would love to hear from you. Send your comments to editorial@montrealfamilies.ca