Home / January 2013 / Could problems at school be related to vision? 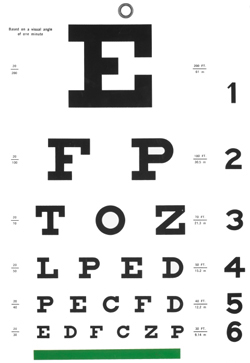 When my son, Nathan, was in Grade 1, we thought everything was going fairly well at school. He didn’t have trouble reading, in math, French, or any other subject. We did, however, notice that he was a little clumsy, his work wasn’t very neat, and he tended to be easily distracted.

But when his teacher suggested we have his eyes checked, we were a bit surprised. Since he can spot the exit number to get to Grandma’s house half a kilometre before I can, I couldn’t believe he had a vision problem. I was so unconcerned that six months passed before I brought him to see Dr. Margaret Ronis, the behavioural optometrist his teacher recommended.

Apart from discovering that he’s slightly far-sighted, we were also told he had poor visual memory and visualization skills, and couldn’t follow an object’s movements with only his eyes – he had to move his head as well. It turns out he wasn’t just clumsy; his gross motor skills were lagging – he couldn’t touch his knee with the opposite hand while walking in a straight line. She prescribed glasses for his in-class schoolwork and recommended he do something called “vision therapy”.

More common in the U.S., vision therapy is gaining more recognition in Canada as of late; these behavioural optometrists are specialists who study how vision affects behaviour. Typically, they teach a set of exercises designed to improve control over eye alignment and movement, tracking (following an object or knowing where a line of text ends and where the next begins) and eye teaming (when both eyes work together properly).  Over time, the exercises help the brain interpret and process visual information more efficiently.

For most children, a lack of visual skills usually becomes apparent when they learn how to read. They tend to lose their place easily, skip words or lines, or use a finger as a guide (see sidebar for more signs). For some children, vision problems are more obvious, especially if they are cross-eyed or have a lazy eye. For others, it’s subtle: they might have double vision or convergence insufficiency, a condition where the two eyes don’t work together as they should. Eighty per cent of our learning is perceived through the visual system, so it’s logical that a vision problem can affect a child’s learning.

When assessing a child, behavioural optometrists not only check eyesight and eye health but also the following: 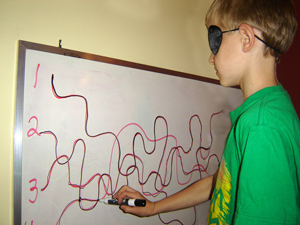 We had monthly in-office sessions with Dr. Ronis where she had Nathan trace lines on a white board with one eye covered, arrange a pattern of coloured beads from memory, or tap a ball suspended from the ceiling with different parts of his body (elbows, knees, palms). Then we repeated the exercises at home, several days a week. Each session introduced new exercises to keep things interesting and maintain progress. A typical treatment program lasts several months, and patients (and their parents) usually start to see progress after one month of practice. We paid $95 for the one-hour visual perception motor evaluation, which is followed up with a written report and $70 for subsequent half-hour therapy sessions.

Vision therapy does not fix learning disabilities. “But we do fix the vision problems that can exacerbate the learning disability,” Dr. Ronis said. There are no age limits on treatment, though younger children generally have fewer bad habits to correct. Older children might also need extra academic support to help them catch up on what they’ve missed.

Children get a confidence boost when they realize they can perform everyday activities like their peers. For an 8-year-old, hitting the hockey puck for the first time is a big deal. A teenager who realizes he can simultaneously write notes and listen to the teacher should see a significant impact in academic performance.

Nathan’s case wasn’t all that dramatic, but it definitely helped his gross motor skills – by spring he no longer needed his training wheels on his bike and was catching a Frisbee without any problems.

There are only three vision therapy offices in Montreal

Dr. John Abbondanza is a Massachusetts-based behavioural optometrist who has produced a series of short videos about vision therapy and the reading process. This site also has a Vision Symptom Checklist available for download.  www.greatvisioncare.com/visiontherapyvideo.aspx

Parents should consider having their child assessed by a behavioural optometrist if they notice a child: