Once you become a parent, you often have to re-think your beliefs and preconceptions. “I’ll never use TV as an electronic babysitter,” you mutter until you’ve been housebound with two flu-stricken toddlers for almost a week. But clinging to certain attitudes can sometimes make us blind to what our children are actually experiencing. I discovered this first hand with my son, who has recently been diagnosed with attention deficit hyperactivity disorder (ADHD).

If you’d asked me a few years ago, I would have probably said that ADHD is a convenient label put on children, especially boys, by profit-hungry drug companies. And that it is encouraged by an out-of-date school system that is looking for an easier way to maintain discipline in the classroom.

Unfortunately, these misguided beliefs prevented me from getting help early on for my son, who I now know has a neurological condition, rooted in genetics, and not just a “spirited nature.”

As a toddler, my energetic son would run from place to place, bumping into poles, tables and people in his hurry to get to another activity, only to discard it and start running again. His temper tantrums left us both exhausted, and nothing we tried could calm him down. Getting him to fall asleep was a long drawn-out mission requiring precision timing, warm baths and massage.

I blamed his behaviour on the fact that he was one of the youngest in the class and clearly not ready for school. I withdrew him from junior kindergarten, put him into a creative pre-school program and then enrolled him in JK again a year later at a different school.

His next experience was more positive but there were still signs of a deeper problem. His teacher, a truly gifted educator, told me he was a bright, polite kid, but needed constant reminders to stay on task. He had trouble sitting still, his communication involved him talking non-stop about his current topic of interest and he was ALWAYS forgetting things. I could relate because it was the same at home. She hinted at attention issues and testing.

“That’s just Justin,” I rationalized. “That’s the way he is.” Besides, how could a kid who could sit at the table for hours patiently building Lego structures possibly have attention problems? We talked to his pediatrician but were told there was no need for concern.

Subsequent grades saw more difficulties. Although he did OK academically and never got into serious trouble, he began to hate school. Writing was an exercise in torture for him. He struggled with spelling, often made careless mistakes in tests, and worst of all, no matter how hard he tried, he couldn’t fit in socially. It broke my heart to see him rejected and change from a basically happy kid to a stressed-out, frustrated one.

Finally, at our wits end, we decided to get him tested. We tried through the school first, but after a year on a waiting list, we had the tests done privately. But even as the psychologist was explaining that the results of the tests showed clear indications of ADHD, my mind couldn’t accept it.

I attributed his problems to his high IQ. But as I re-read the report at home, it became harder to ignore what was there, in black and white. Justin showed scores well in the clinical range of measures of ADHD along with weaknesses in executive functions (a term that covers working memory, time management, self-awareness) and difficulties in peer relationships. Those weaknesses hit a chord. I couldn’t deny that those were his exact areas of difficulty nor could I explain away the list of behaviours that suggested ADHD. So acceptance finally set in and as a result, we developed more patience as parents. At school, accommodations were made for him, but the struggles remained. Medication was suggested. My pre-conceived notions got in the way, again. Stimulant medication for kids just didn’t seem right. What about the side effects? So instead, we tried homeopathic remedies, upped his omega-3s and changed his diet. None of it worked.

With reservations, we decided to give medication a try and he was prescribed Concerta, a slow-release central nervous stimulant. The effect was instantaneous. My husband and I looked at each other in amazement as we talked with Justin on the couch the first day he took the medication. It was an actual give-and-take conversation. He looked into our eyes. He listened. And then responded — on the same topic. We were blown away.

Grade 4 has been his best year to date, with higher marks, both in academics and behaviour. Best of all, he’s happier and no longer hates school. He still doesn’t like it, and I’d be lying if I said all of his problems have disappeared, but it’s better.

I feel that now, with the right diagnoses and the right tools (which includes medication for the time being), a brighter future lies ahead for Justin.

Resources for coping with ADHD

The AD/HD Book of Lists: A Practical Guide for Helping Children and Teens with Attention Deficit Disorders by Sandra F. Rief.

This book has practical information on interventions, behavioural strategies and tips to help ADHD children be successful at school. The checklists and forms are easy to use and designed as a handy reference source.

Using the latest scientific research, the authors give ways to overcome social and learning difficulties. 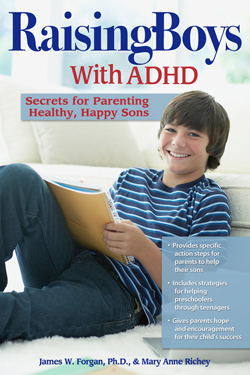 The authors provide strategies and practical advice for every stage of your child’s life.

The Everything Parent’s Guide to ADHD in Children by Carole Jacobs & Isadore Wendel.

A reassuring and comprehensive guide to obtaining the correct diagnosis, treatment options and advocating for your child.

Putting on the Brakes: Understanding and Taking Control of Your ADD or ADHD by Patricia Quinn & Judith Stern.

The book is chock full of practical advice on how to make friends, get organized and study effectively.

My Brain Needs Glasses: Living with Hyperactivity by Annick Vincent.

An imaginary journal of an 8-year-old boy helps kids understand their ADHD and deal with it effectively.

My Brother’s A World-Class Pain: A Sibling’s Guide to ADHD/ Hyperactivity by Michael Gordon.

This books helps other children in the family understand and cope with their ADHD sibling.

In their book, Raising Boys with ADHD, Secrets for Parenting Healthy, Happy Sons, authors James Forgan & Mary Anne Richey, both professionals in the field and parents themselves of ADHD boys, have listed characteristics that have been shown to be common in children later diagnosed with ADHD.

The authors note that all children may have some of these behaviours at different times without meeting the criteria for an ADHD diagnosis. It is critical that parents seek professional help answering their questions and concerns.