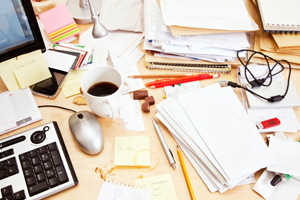 messy desktop with mouse, part of keyboard and lamp, stacks of envelops and files, office supplies and small receipts, some pc equipment as well lying around, coffee, remains of food, coffee stains on papers, part of series,

“I have no problem throwing anything out,” I said glibly to professional organizer Rachael Kalinsky when she entered my home. And, naively, I believed it.

The three-hour organizing session had been an impulse purchase on a Groupon-type site. I was clicking through e-mails when I saw the deal for “Order in the House.” My finger hovered over the delete button, but as I scanned the piles and piles of paper on my desk (and in grocery bags under my desk), I clicked “buy” instead.

A few weeks later, the organizer stood in my dining room/office/kids’ activity centre, and I was all set to purge.

We breezed through the kids’ art and school supplies. Hands flew as we tossed dried-up markers into the garbage, outgrown craft kits into the charity pile and used colouring books into the recycling. Kalinsky has a rule about not leaving the room you’re working in. It helped. I didn’t get distracted and working with someone made the time pass quickly.  In less than an hour, I was smiling at three beautifully organized shelves.

Why hadn’t I done this earlier?

“There’s this drawer,” I said. It had been at least four years since I used it, and it was so crammed full I needed to squeeze my hand into a small slit and push down on some Christmas card boxes just to get it open.

“Is this the worst you’ve seen?” I asked her, embarrassed.

“Everybody always asks that,” she said sweetly, avoiding the question.

We spilled it all on the table: old calendars, cards, art, letters and journals – lots and lots of journals.

I stared at years of my life, and my smile disappeared. The calendars should have been easy enough to toss, but I made the mistake of fanning through them, reading the scheduled play dates, doctor’s appointments and vacations scribbled in the squares. Musical Munchkins 2:30 caught my eye. An image of my daughter as a baby popped into my mind, sitting on my lap, giggling as I moved her hands in a circle, singing action songs and nursery rhymes.

“Is this something you want to keep forever?” Kalinsky asked. No, of course not.  Gingerly, I placed the 2005 over-sized family calendar into the recycling, along with several others.

Next, the artwork. I saw my son’s kindergarten-sized hand on a paper plate. My eyes watered. I kept it.

Each scrap held a memory and I struggled with each decision. The Thanksgiving turkey with the poem my son recited at grandma’s house?  Yes. The all-orange finger painting? No. I put it in the recycling, and then took it out. “He was obsessed with orange in kindergarten,” I said, trying to rationalize my decision.

And there were journals – tattered spiral notebooks and writing pads, crammed full of to-do lists, phone numbers, addresses, class notes, interviews, ideas, drafts of stories, the beginnings of unwritten novels. My life. I flipped one open and found a breast-feeding log. The days after my son’s birth came flooding back, including my worries, and fears.

I showed it to Kalinsky with an embarrassed laugh, sure she must think me insane for having kept it this long.

I froze. My earlier words mocked me.

I mumbled an excuse that I might need to transfer some phone numbers from the journal to the computer. I couldn’t admit that I couldn’t throw it out.

“That’ll be your homework,” she said and arranged the notebooks on a shelf.

I breathed easier; relieved they were safe as we moved on to less dangerous territory:  tossing old magazine clippings. Did I really think I’d ever try that 20-ingredient Vegetable Biriyani recipe? 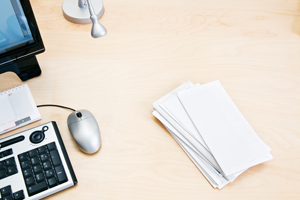 Four months later, I still haven’t done my homework. Deciding what to keep and what to throw away is not easy when it’s attached to a memory, and judging by the number of books on the subject, including Clutter Rehab, Clutter Diet, Clutter’s Last Stand and Clear the Clutter, I’m not alone.

Yes, I’ve watched the reality show, Hoarders, which never fails to make me feel better about my own house. Sometimes it seems that no matter how many bags we throw out, there are always more coming in.

I’m not convinced all clutter is bad. I like my refrigerator to be covered with art and notes. I like my memories of years past even if they’re hidden in scraps of paper. Science-fiction author Ray Bradbury said this about why he was a packrat and kept everything he cared about since childhood. “Sometimes an object, a mask, a ticket stub – anything at all — helps me remember a whole experience, and out of that may come an idea for a story.”

In my clutter are my family’s stories. Maybe one day I’ll go through it, but for now I’m keeping my notebooks, including the one with my breastfeeding log. If anything, I figure if my kids ever doubt my devotion, I’ll have tangible evidence to show them.

Tips from the pros

Rachael Kalinsky, who started her company, Order in the House, in 2009, has always been an organizer at heart. “My mom would tell you that as a kid, I always knew where to find my toys, clothes and books, and I always put them back where they belonged.”

Another professional organizer we contacted, Debbie Bunze, confessed to being in love with her label maker.  Here are some of their tips:

Protect the good stuff. For paper memorabilia (art, certificates, photos, schoolwork etc.) use a waterproof bin for each child and let them choose what to keep. Keep the bins out of the basement as humidity can damage their contents. When the kids leave home, give them the box.

Put all the hangers backwards in the closet. Each time something is worn, turn the hanger around. Every six months examine the clothing that hasn’t been touched. Be realistic about the clothes you’re not wearing and give them away.

Schedule a time and start small. Don’t put too much pressure on yourself or you’ll get overwhelmed and continue to procrastinate. Set realistic targets: focus on one bookshelf, closet or room at a time.

Have the right tools. Set yourself up with garbage, recycling and donation bins, and a relocate-to-another-room bin (or bag) so you don’t leave the room and get distracted.

Create a place for everything. Hang hooks for the kids’ backpacks as they come in the door; baskets for similar items or toys; a letter tray for mail.

Deal with it now. It takes just a minute to put the book back on the shelf, take out the trash, or put away clean laundry. It saves time, reduces the nagging and keeps things from piling up and you from feeling overwhelmed.

Make it a family chore. Get the kids involved in donating old toys, pasting labels or photos on baskets to identify their contents, and putting things back where they belong.

Relax. People often believe they are the worst, but staying organized is a very common difficulty. Never feel embarrassed.

The cost of hiring a professional can vary, some charge by the hour, others by the project, but expect to pay about $60 an hour.

For more tips, or to find a professional organizer in the Montreal area, visit www.organizersincanada.com/get-organized.