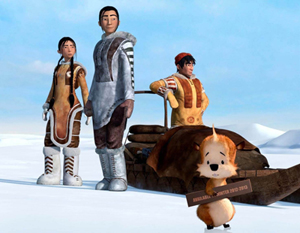 The Cinémathèque québécoise, Montreal’s museum dedicated to moving images, is inviting families to drop by Sunday afternoons and enjoy classic French films until May 29.

On Feb. 7, it will be Kérity, la maison des contes, a 2010 animated production directed by Dominique Monféry. The film tells the story of Nathaniel and his sister Angelica who discover their aunt’s incredible book collection. The siblings soon realize that their favourite literary characters are living within the pages and need Nathaniel’s protection from a cruel witch.

On Feb. 14, La légende de Sarila, directed by Nancy Florence Savard will be shown. This Canadian animation tells the story of Apik, Poutoulik and Markussi, three Inuit children trying to save their tribe from a curse placed upon them by the malicious goddess Sedna, who has made all of their livestock disappear. The three siblings then embark on a quest to find the utopian land of Sarila, but face several challenges along the way.

On March 13, the film will be a classic by Jacques Demy from 1971 entitled Peau d’âne. In this musical adaptation of a 17th century story, a powerful king promises his ailing wife that after her death he must marry a woman as beautiful as she is. The king comes to the conclusion that his daughter is the only one who meets that requirement. In order to avoid this fate, the princess puts into place a series of obstacles to dissuade her father from following through with his plan.

Films will be shown at 1:30 p.m. in the Claude-Jutras room. Snacks and refreshments will be served prior to the screenings. Tickets cost $10 for adults, $9 for kids ages 4 to 16, students and seniors, and free for Cinémathèque members and children between the ages of 1 and 3. Special offers are also available for families. The Cinémathèque québécoise is located at 335 de Maisonneuve Blvd. E.