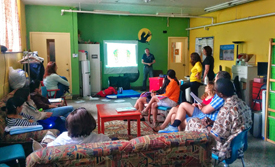 It can be overwhelming enough for a college or university student to balance classes, assignments, work and a social life – imagine having to add caring for kids into the routine.

Enter the Cigogne Association, a centre in Cote-des-Neiges that aims to help student-parents balance academic and domestic responsibilities.

Director Luz Stella Hernandez said the large majority – 80 per cent – of its members are new immigrants who already have degrees but are completing Canadian equivalencies in Montreal.

First opened in 1997, Cigogne is a place where parents can network with other parents who are living in similar circumstances and encountering similar challenges. Hernandez says they have an average of 250 families from across the city who sign up for their services each year.

The centre is a non-profit organization funded by government grants and donations. Their space is modest – two fairly small rooms in the basement of a building at the corner of Côte Ste. Catherine Rd. and Decelles Ave. One room is for parents; there’s a table and chairs set up in the back for those who want to study, and a couch and  several chairs around a table for clients who want to work in a more relaxed environment.

The centre doesn’t offer a full-time babysitting service, but its second room is used to entertain children when their parents are attending a workshop or event hosted by the centre.

There are various workshops such as: how to fill out tax forms, baby massage and  first-aid. The centre offers a weekly  “coffee date” on Friday afternoons when parents can  have a coffee, talk and relax, with or without the kids.

Noha Taha has been a member for six years. She says the reality of a student-parent’s life is that they work at a different pace than students without children.

“It’s a different rhythm,” she said. “You have to bend to the needs of your kids.”

She says the financial constraints are the toughest part of the balancing act. Taha is completing a doctorate in French literature and says concentrating on her studies and her kids leaves little time for work.

Monica Narvaez, a student-parent who also volunteers at the centre, has a 5-year-old son. She says financial constraints are what makes a place like Cigogne so appealing – joining is free, the majority of the workshops cost around $10, and the association operates a thrift shop where they sell secondhand items for $1 apiece. The back corner of the room is piled high with bins full of donated clothes to be sold in the thrift shop.

Taha’s children are now 7 and 3. She and Narvaez agreed that while a baby demands a certain kind of attention, their routines aren’t easier now that their kids are a little bit older.

“He wants to go out, he wants to do fun things,” Narvaez explained. “It’s difficult, but in a different way,” Taha said.

The centre’s annual Christmas celebration is a big hit with parents and kids alike, and their potluck dinners and weeklong summer camp are also popular, Hernandez said.

The centre is a place where the kids can make new friends. Taha said when she’s in the area, she will often stop by to have a coffee, or take advantage of the free Wi-Fi to get some work done.

Though the space isn’t big, the ambience keeps them coming back, she said.

Narvaez nodded her head in agreement. “It feels like home here.”