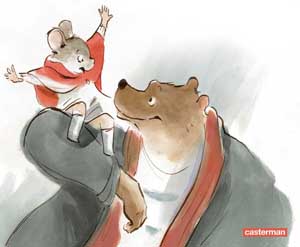 Ernest et Celéstine, a film that celebrates an unlikely friendship between a bear and a mouse, will open the week-long Montreal International Children’s Film Festival on Saturday, March 2, 2013.

The France/Belgium/Luxemburg co-production is one of more than 60 films from 27 countries that will be screened at Cinéma Beaubien during March break. Most films will be in their original language with English subtitles (there will be actors reading a French narration of the subtitles).

The festival includes an official jury competition, as well online voting for a viewers’ choice prize.

Screenings are held at the Cinéma Beaubien, 2396 Beaubien St. E. Tickets are available at the cinema, by calling (514) 721-6060 or online at  www.cinemabeaubien.com.

For more information, including a schedule of screenings, descriptions of the films, as well as suggested age guidelines, visit http://fifem.com.