CEPSUM has an array of day camps

When her daughter Sophia was 6, Roxane Maranger, a biology professor at the University of Montreal, was on the hunt for a reputable day camp that would offer a wide range of fun activities. Turns out, she didn’t have to look far; she discovered the university she worked for offered a variety of camps from circus and sports to tennis and cooking for kids ages 6 to 15.

So for the past three year, Sophia (who was soon joined by her twin brothers Paul and Lucas) has spent several weeks attending camp at the Centre d’éducation physique et des sports de l’Université de Montréal (CEPSUM).

They’ve done the soccer, circus, swimming and general sports programs. They’ve jumped on the trampoline, swung on the trapeze and learned to juggle. They’ve also mastered the crawl, dabbled in diving, performed in dance shows, and taken part in soccer competitions.

“It’s fun, safe and well organized,” says Maranger, adding programs are taught by trained specialists who are also able to spice up the daily routine with “crazy dress days” and “wacky hat contests.” Other times they had sporting competitions or dance and theatre performances. Every day, they would swim for an hour, go down water slides and take part in activities other than their chosen program. Maranger says that getting her kids to sleep was never a problem at the end of a camp day — they were practically nodding off in the car or over dinner.

Mira notes that each program has a number of hours dedicated to learning specific skills. For example if your child loves sports, he or she can do a soccer, football or volleyball camp. They’ll practice their sport for two to four hours in the morning and then do other activities in the afternoon.

CEPSUM also offers one-week sessions in tennis, martial arts, dance, hockey, diving, general sports, drama, magic and even cooking, which is taught by a nutritionist at the university. Kids learn about sensible eating habits and lifestyle. The program is a balance of exercise and cooking (three hours a day) so the mini-chefs whip up snacks, desserts, meals and juices and then do other activities.

CEPSUM also offers two-week specialized camps in swimming, dance, theatre, circus and two new programs in cheerleading (ages 8 and up) and musical comedy (ages 10-12) where they perform a show for parents.

The CEPSUM camps have been a success for Maranger and her family; in fact, the three children will return again this summer. As Maranger finishes talking about the camps, her daughter Sophia pipes up. “There are cool activities and you get to swim and the monitors are really fun.” 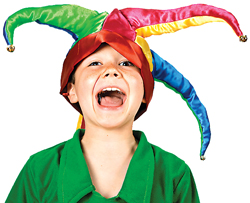