Earlier this year, 7-year-old Luana Fries came home from school distraught; she loved math, but some of her classmates told her it was only for boys. In her moment of uncertainty she turned to her father Benoit Fries, a self-proclaimed science enthusiast. However, much to his dismay, he could not think of any female mathematicians.

“We were lucky to have had some help from our dear friend Google,” said Anouk Charles, Luana’s mother. “It made us realize that something was wrong in our culture, because if a science geek can’t name a few women scientists, then who can? Why is it that we can name many singers and actresses, but only a couple of female scientists?”

So Charles and Fries, who live in Laval, came up with a way to combat the lack of female visibility in the science world. They created a strategic card game, one that would be fun but also teach children about Einstein and Pasteur’s female colleagues, who unfortunately never received due recognition.

“We had to do a lot of research; at one point we had a list of more than 250 names,” Charles says. They enlisted the help of graphic designer Fran6co, who in the end brought 44 of science’s leading ladies to life through colourful illustrations. Each card has a short description of what makes each woman special.

The premise of the game is easy for young children to grasp: there are five categories, each with a designated colour. Players need to match four cards of the same colour in order to form sets, called labs, and the first to make three labs wins. However, the game includes special cards that let you steal scientists from your opponents as well as other twists.

After creating the game, which can also be used like any other 52-card deck, the couple posted their project on crowd funding site Indiegogo to see if others were interested in funding their project. The initial goal was US $3,000 so they could order 1,000 packs, which they reached in less than a week. Since April, they’ve raised more than US$18,000 on Indiegogo to produce the game, have sold more than 1,000 packs and have donated nearly 700 to schools and non-profit organizations.

“We got a lot of support from all over the world, which was amazing and surprising,” Charles said. “The crowd funding campaign was very popular in the U.S., but also in Australia, U.K. and New Zealand. The Australian Academy of Science sponsored us and helped with the content. Teachers and parents told us how they intended to use the game, and made suggestions on how to improve it. It’s been really motivating.”

Charles and Fries have now started a company to support the Women in Science card game. As a reminder of why they are pursuing this project, they decided to name their company Luana Games, after their daughter.

You can buy the card game online for $20, with 20 per cent of the proceeds going toward organizations that promote girls in science. Moreover, there is a free version that can be downloaded and printed from home.

“It’s a way to propose another kind of superhero to our kids; ones who, with their knowledge, perseverance and hard work have cured diseases, invented many devices and technologies we use every day, and explained the mysteries of our universe,” Charles says. 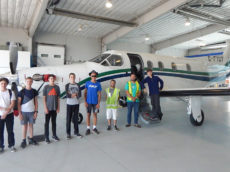 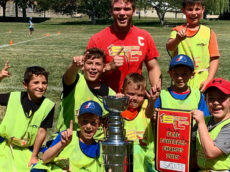