When Andrew Dumas was 41, he was diagnosed with thyroid cancer. He told a close friend that the most important thing for him was to be able to see his two young children grow up. At the time, Abigayle was 2 and Michael was 5. “I was scared; I didn’t want to die before seeing my kids become adults and be self sufficient,” said Dumas, who is a Hudson resident and volunteer firefighter.

The two friends agreed that “they had the best lives in the world” and chatted about the importance of giving back to society.  “I thought about our conversation over the years but didn’t do anything about it,” Dumas said. Thankfully, Dumas’ cancer treatment was successful and he has been in remission for eight years. But his good friend didn’t meet the same fate. Two years ago, the 48-year-old was diagnosed with stage four pancreatic cancer and died 16 months later. He left a wife and 8-year-old son.

“When I got word about my friend’s diagnosis, I decided I had to do something,” he said. So he began asking the firefighters in Hudson if they would be willing to shave their heads to raise money for the Canadian Cancer Society.  Twenty-seven guys agreed and Shave to Save was launched. They set the goal at $3,000 and raised $5,410.

This year, they set the goal at $5,000. Many people from the community wanted to get involved, including several women and children. In total, 46 people shaved their heads on April 25 and they raised $10,369. “We had some people drop in on the day and take part, contributions at the raffle table rolled in and musicians gave their time to entertain the people involved and their families,” Dumas said. “I was told by the representatives of the Canadian Cancer Society that we will be able to help over a thousand cancer patients with this incredible sum of money.”

Montreal Families talked to some of the kids and their parents to find out what motivated them to get involved. Here’s what they had to say. 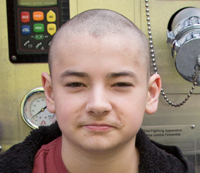 I shaved my head because I knew it was raising money for a good cause, and people with cancer would feel better knowing that we had our heads shaved for them. After having been shaved bald, I felt proud of myself knowing people with cancer would see they weren’t the only ones without hair. Even if it did feel slightly humiliating, I did it so someone, somewhere, would feel a little bit better.

I got involved only partly because the newspaper I work for supports the Hudson Firefighters’ initiative every year – but also because I saw how much people were pouring their hearts into this cause.   When Damon saw the photos I had taken for the paper, he started asking questions about the kids. It wasn’t long before he asked if he could take part, and of course I said ‘yes’. Typical of Damon who does things to the extreme, he didn’t just want the hair cut short, he was shaved completely bald. We’re very proud of him and, as the youngest of the family; he’s being a good sport about putting up with all of us rubbing his head. 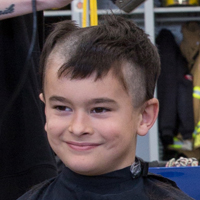 Liam decided to shave his head in support of his Nanna who recently has been diagnosed with cancer.  He was very excited and anxious in the days leading up to the shave, but was fine when it was done.  After he was shaved you could see that he was proud of doing it, no regrets and he continued to volunteer at the bake sale table for several hours.

Liam is a very caring soul.  I am very touched and proud that he chose to shave his head in support of his Nanna.  It was a very emotional day for me to watch both Liam and my dad shave their heads at the same time.  My dad was crying as they shaved him, not because he was losing his hair, but because he was thinking of my mom. Liam was smiling throughout the shave; he did not seem concerned that he was losing his hair.  I am very proud of him! Cancer has taken us all by surprise and it has made me realize how the time we have to share with our families is very precious. 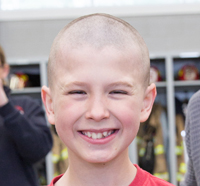 Gabe shaved his head last year and wanted to be part of it again.  I was extremely proud that he had the guts to do this. I was away that day and I saw all the pictures my wife took and Gabe was smiling the whole time. I asked him why he seemed so happy and he said a part of him was trying not to cry. That made me cry a little. 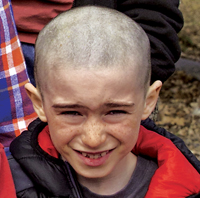 There are a lot of people in this world who have cancer and I hoped shaving would help some of them. Many of my friends’ grandparents and my great-uncle have cancer and if I can help one of them, maybe they wouldn’t have cancer anymore.

Originally we went to the event so that he could support his two Friends, Liam and Gabriel, participate in Shave to Save. Dylan went without the intention to participate as he really loves his hair but, before the firemen started their shave, one of them called out asking if anyone else wanted to be shaved. Much to my surprise, Dylan put up his hand.  He is full of empathy and was really impressed by the bravery of these other kids and felt that he needed to do this too.  He missed his hair almost immediately but was happy that he “helped save people with cancer.” My uncle (Dylan’s great-uncle) who is like another grandpa to my kids, was recently diagnosed with prostate cancer so Dylan said “I miss my hair already but I did it for uncle Rod and everyone else with cancer”. 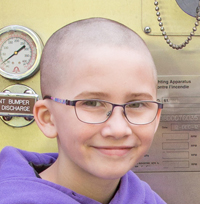 I did it for my great-grandma and grandpa. It made me feel good because it was for an important cause. And I actually really liked my shaved head!

I took part in memory of my grandparents. My grandmother passed away six weeks after being diagnosed with stomach cancer. Watching her deteriorate so quickly was horrible and haunting. My grandfather died of skin cancer a few years later. I am especially proud of Emerson for being by my side and volunteering her head for the shave all on her own. She is an incredible, fun-spirited girl. 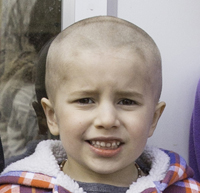 Ethan usually isn’tvery good with change;he has autism. But when my husband and my 9-year-old son Ayden wanted to show their support for cancer research, Ethan jumped on the bandwagon. He wanted to shave his head for kids with cancer so they didn’t feel sad about losing their hair.

I feel immensely proud of my children. I was really worried how Ethan would react to having his head shaved. As I said, his autism makes him uneasy with change. He’s always had longer hair and was always set on keeping it that way. But as I shaved his head, I looked at his face and all I saw was joy. The look on his face made my heart sing.

I volunteer my time for about five other foundations every year. So when the organizer, Andrew Dumas, asked me to shave some heads, it was a no brainer. I asked two other women (Tracy Gledhill and Katie Van Kessel) who I work with to help out. Cancer is unfortunately part of many people’s lives. In my case, both of my grandfathers died of brain cancer. One of my clients is fighting non Hodgkin’s lymphoma at the moment. She’s very young and so strong and I think of her every day. My part in this year’s Shave to Save was for her. 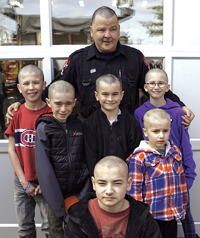