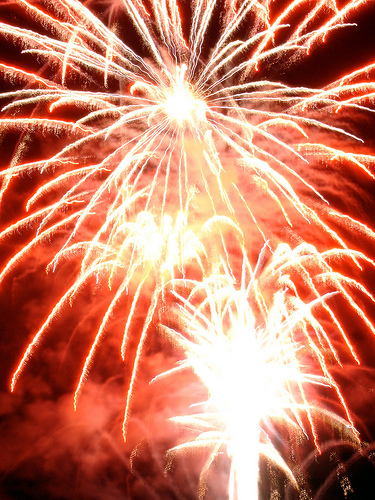 Here’s a guide to some of the Canada Day family activities happening in and around the city.

Canada Day Parade 2010: The main Canada Day parade starts at the corner of Ste. Catherine and Fort Sts. at 11 a.m., with many floats representing cultural/national groups. The parade ends at Phillips Square, on the corner of Union and Ste. Catherine Sts. at approximately 1 p.m. At Philips Square until about 4 p.m., there will be inflatables, musical entertainment and a Canada cake.

Châteauguay Canada Day: Fireworks will be held June 30 at 9:45 p.m. at Marcel Seers Park. On July 1, there will be activities from noon to 10 p.m. at the Guy Scott Arena, including musical and dance performances. More information.

Lachine Canada Day: 7:30 p.m.: Concert by Couleur Gospel will be held at the marina d’escale in Lachine.

Montreal West Canada Day: 3:30 to 10 p.m.: Activities include bike decorating at Davies Park at 3:30 pm., parade along Westminster at 4 p.m., activities at Strathearn Park at 5 p.m., fireworks at 9:45 p.m. at Hodgson Field. Other activities include music, dancing, barbecue and inflatables. More information.

Pointe Claire Canada Day: 1 to 10 p.m.: Family activities include inflatables and face-painting, free swim at the village pool, musical performances and barbecue, parade through the village at 6 p.m., fireworks at 10 p.m., at Bourgeau Park. More information.

Hudson Canada Day: Celebrations from 3 to 11 p.m. at Thompson Park.

Pierrefonds Canada Day: Parade leaves Riverdale High School at 10 a.m., going along Sources Blvd. to Pavillon St., then to Perron St., to Pierrefonds Blvd., ending at the Borough Hall. Evening show at 8:30 p.m., fireworks at 10 p.m., at Pierrefonds Comprehensive High School, 13800 Pierrefonds Blvd. Pierrefonds. From June 30 to July 4, there will also be an amusement park set up near city hall.

Town of Mount Royal Canada Day: Noon, Canada Day Ceremony will be held at the cenotaph in Peace Park in front of the town hall, 90 Roosevelt Ave. More information.