Camps that are out of this world

If it’s your dream to travel into space but you don’t have billions of dollars in the bank, why not look into the Parent-Child Discovery Camp offered by the Cosmodome, a science centre in Laval that focuses on space exploration.

Parents and children (ages 9 to 15) spend a day and half at the Cosmodome to learn about and participate in a simulated space mission. After arriving at the centre, families get an age-appropriate crash course in physics, where they conduct experiments in rocket propulsion and solar energy. Participants then get to try two different simulators, similar to those used at NASA, to experience the weightlessness and disorientation that comes from walking on the moon.

After that, it’s dinner and then straight to bed in one of the centre’s space modules, neatly outfitted with beds (sheets provided). On day two, families eat breakfast and then prepare for their mission: repair a satellite in orbit. Every participant is assigned a role — some will work at Mission Control (on earth) while others will board the shuttle and head into space. A small secret: expect that there will be some kind of crisis such as a gas leak! Then watch things get really interesting as everyone scrambles to fix the problem. The camp’s facilitators will be on hand, of course, to guide everyone to a happy ending. 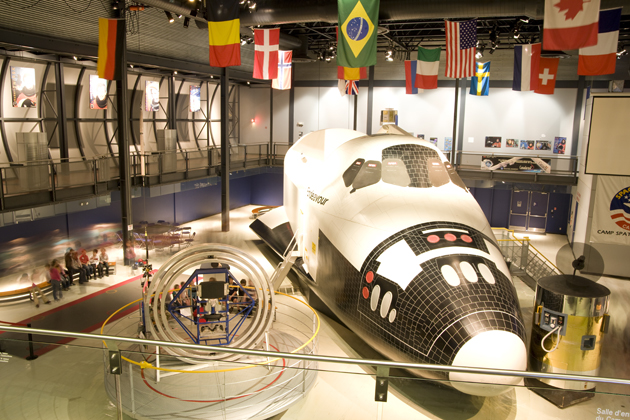 The Parent-Child Discovery program costs $370 for one parent and one child, or $640 for a family of four. The rate includes all workshops, catered meals, snacks and overnight accommodation. Participants must wear comfortable shoes and clothing. Children must be a minimum height of 128 cm (4’2”). The maximum weight permitted is 100 kg (220 lbs). The program takes place July 16-17, 2011.

Sleepover camps at the Cosmodome

The Cosmodome also offers three- or six-day sleepover camps. Young people age 9 and up attend workshops to learn about science and engineering, try out the training simulators (just like the ones used by NASA) and then participate in a space mission aboard the shuttle Endeavour. Lara Girvan attended a week at Space Camp when she was 15. Assigned the role of “Payload Specialist” during her team’s mission, her job was to calculate the precise moment the flight crew was to perform an experiment. “We had to have 100 per cent accuracy with 100 per cent timing — that was the goal,” she recalls. On another mission, she was the astronaut and had to assemble a geometric structure while wearing the astronaut suit. “It was really difficult working with those gloves.” In the end though, Lara’s group won the award for Best Mission.

For more information, go to www.cosmodome.org/space_camp.html