Books to teach kids about the plight of refugees

In the last month or so, Canada has started welcoming some of the 25,000 Syrian refugees who are escaping the horrific war taking place in their homeland. Although Canada has a strong and proud history of opening its borders to refugees, the incoming of any new cultural group can elicit some fear, doubt and misunderstanding. Most groups arriving in a new land, whether as immigrants or refugees, experience some form of discrimination. As Syrian refugees make their way to communities across Canada, it is our chance to offer a warm welcome as they begin their new lives. The following books will help your children understand the refugee experience and the importance of providing a friendly and accepting environment for them. 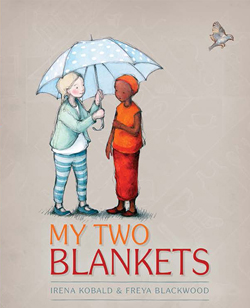 This lovely picture book captures the sense of isolation and alienation experienced by refugee children when they arrive in a new country. The story follows a young girl who has just moved with her aunt to a new land, leaving behind everything she knew and loved. She feels overwhelmed by her new environment, especially since she can’t speak the language, and finds comfort in a blanket that she brought with her that reminds her of home. When a little girl at the park is eager to play with her, she is hesitant at first and feels the weight of the language barrier between them. With time, the two girls become good friends. Each time they meet, her new friend teaches her some words in English, and she begins to create a new blanket. Thanks to the first person narrative, young readers will be able to put themselves in the shoes of the young girl and feel her experience as a refugee. It creates empathy as readers sense her loneliness and desire to be understood, and realize how friendship can help create a true sense of belonging.  By the end, readers will hopefully be wondering how they can offer their own friendship to newcomers. 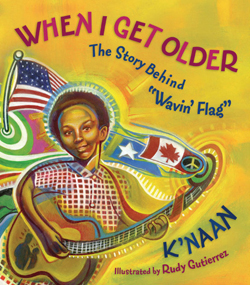 Canadian singer-songwriter K’Naan knows what it is like to arrive in a new and unfamiliar land and have to adapt – he was born in Somalia, which is one of the most war-torn and underdeveloped countries in the world. At the age of 13, he left the country as a refugee with his mother and siblings, first going to New York City and then Toronto. His popular song Wavin’ Flag describes the peace and freedom that Somalis wish for, and this picture book explains the story behind the song, the experience of those living through conflict and the difficult decision of having to flee. The book is written in the poetic language that K’Naan uses in his songs, and the story shows how his music has helped him stay connected to his homeland. He also relates the difficulties he faced in adapting to his new life and how he drew on the strength of those he left behind and the opportunities afforded to him in his new homeland to build a new life for himself. By sharing his story, K’Naan tries to break down some of the stereotypes about refugees and help create a culture of acceptance that will allow other refugee children to thrive.

Seven Syrians: War Accounts From Syrian Refugees (8th House Publishing, $18.88 – can be ordered directly from the publisher)
by Diego Cupolo – Ages 13 and up 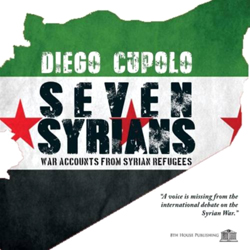 Recently, images of Syrian refugees spilling onto the shores of Europe was the catalyst for our government to welcome more Syrian refugees to Canada. Teenagers most likely saw some of these images and possibly have heard details about the war in Syria. This is a complex situation and media reports have largely focused on the terrorism wrought by the group calling itself ISIS. The lack of access to Syrian families has meant we rarely hear from the people caught up in this conflict. In this book, Montreal-based photojournalist Diego Cupolo sheds light on what life is like within the borders of the war-torn country and what those fleeing have lived through. He assembles the portraits and personal stories of seven Syrians; the profiles range from an English teacher who hid for 45 days in a cave to escape bombings to a primary school teacher who describes the impact of the war on her young students and how the rise of Islamic fundamentalism is affecting her as a woman. Readers will see that those making the journey to Canada share the same dreams and hopes we all do for a better future.