Education
Things to Do
Travel

Books that will give kids the travel bug

The gift of travel, whether to far-flung destinations or areas close to home, is important for children. Travelling exposes them to new cultures, allows them to see magnificent sights and gives an awareness of the diversity and rich history of the world in which they live. But even before leaving home, you can show young people the wonders of travel through books that literally take them on new journeys. Books about travel can plant in children a deep curiosity that will grow and expand with each new discovery they make about a destination, whether it be the Pyramids of Giza or the leaning tower of Pisa.

Kiwi and Pear are two little monkeys who have been bitten by the travel bug. They are taking a trip around the world and readers get to go along with them to such famous places as the Golden Gate Bridge in San Francisco, the Eiffel Tower in Paris, the Great Wall of China and so much more. The book consists of their postcards to the reader, with each page folding out to reveal one of the sights visited by the two curious travellers. Also included is a map of the world, and readers are encouraged to read about a destination, find it on the map and then place a sticker on the spot. It’s a clever way to teach geography to children. The book’s illustrations have a colourful simplicity to them, making it perfect for young readers. They will not only love the cute duo of Kiwi and Pear but will be inspired by the pair’s big and wild adventures.

This book also uses the idea of postcards to bring to life a travel story. The main character is Sunny, a glum meerkat (a small mammal that inhabits parts of South Africa) who feels different from the rest of his fellow meerkat mates and overwhelmed by their constant togetherness. He finds that his Kalahari home in the desert is too hot and becomes convinced that there must be a better place to live. So he sets off on a journey to see what lies beyond the security and safety of his homestead. Sunny goes to visit a variety of family members who live in different places. He sends postcards home, describing his impressions of each place, from cousin Edward’s smelly farm to Aunt Flo’s wet marsh. Through his adventures, Sunny makes his most important and unexpected discovery: that there is no place like home. Without his travels, he would never have uncovered this truth and been able to fully appreciate the beauty of his own environment. Gravett’s busy pages and droll postcards will keep young readers enthralled. Her book incites readers to accept their curiosity and to listen to their hearts, wherever it may lead them. 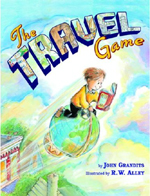 This book shows little ones that you don’t have to leave home to be a world traveller. The author bases his story on his fond childhood memories of growing up in a family of Polish immigrants in Buffalo, New York. The story centres on young Tad, whose parents are owners of a small business and must work long hours. So Tad is often sent over to his old aunt Hattie’s place. She’s a bit eccentric and suggests they play what she calls The Travel Game. They spin the globe, see where their fingers land and then pull out a travel book to learn about the places. Combining the facts they cull from the books with their own imaginations they set off on grandiose adventures around the world. In one afternoon, they ride elephants in India, sail Victoria Harbour in Hong Kong and fight off some frightening creatures in the Amazon. At the end of the afternoon, Tad may still be surrounded by the busy and lively streets of his neighbourhood, but there is no doubt that one day he really will experience the adventures that his Aunt Hattie has shown him. She has given him an incredible gift, one that hopefully will be given to all children.