Books that teach kids about the Holocaust

The world just marked the seventieth anniversary of the liberation of Auschwitz, the notorious concentration camp in Poland where more than one million people were murdered. The horrors that took place at the camp compelled world leaders to pledge that such an atrocity should never occur again.  But the struggle against intolerance and inhumanity is not over and sadly the world continues to witness tragic incidents of persecution.

Not surprisingly, many parents find it difficult to talk to kids about such an unsettling topic as the Holocaust. There are many good books that educate young people about the tragedies that took place in the concentration camps of the Nazi regime. And by delving into this dark moment in history, hopefully they will make a commitment to create a world where such horrors will never happen again. 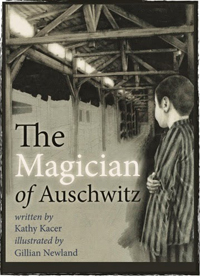 Loosely based on a true story, this book is about the friendship between Herr Herbert Levin and his bunk mate Werner, a young Jewish boy who has been taken to Auschwitz after being separated from his family. The two form a strong bond as they try to survive the brutal treatment at the camp.  One night, when Nazi guards come to see Levin, Werner worries that he is about to be taken away to his death. But instead, they ask him to perform card tricks, and Werner learns that this gentle soul is a magician.  Both realize that entertaining the guards can gain them some time, and Herbert teaches Werner a particular trick to help protect him. This gift of magic was also a gift of joy in a place where death was around the corner. Eventually, the two become separated when the death marches begin towards the end of the war. Incredibly, as the end of the book explains, both survived the horrific experience. The sepia-toned illustrations add to the sense of doom at Auschwitz. This book is a gentle introduction to this difficult topic, and one of the few that is suitable for younger readers. 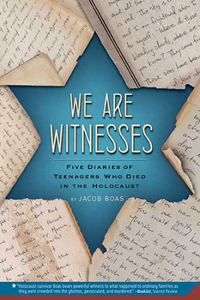 Nothing speaks more powerfully to youth than the voices of their peers, and this compilation brings together the diary entries of five teenagers who experienced the  concentration camps. Tragically, none of them survived, which makes the book all the more poignant and heartrending.  The five writers, including Anne Frank, all lived in different countries where there was Nazi occupation, and each brings a unique perspective on how he/she dealt with this abominable experience. In addition to Anne in Holland, there is David in Poland, Eva in Hungary, Yitzhak in Lithuania and Moshe in Belgium. Rather than simply publish the diaries in their entirety, Editor Jacob Boas, who was born in a concentration camp, selects certain entries and surrounds them with context and explanations of what was happening in the various countries at that time. Today’s youth will relate to those in the book, recognizing in their words the same hopes and dreams that they feel themselves – leading them to contemplate how they would have lived through the terror of that time. 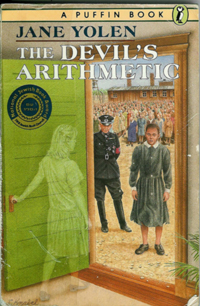 Although this is an older book, it continues to resonate with today’s readers for the way it connects the present and the past. The main character is 12-year-old American Hannah, who is tired of hearing her parents and grandparents go on about the trials of the past. During Passover Seder, Hannah is somehow mysteriously transported back to a village in Poland in the 1940s. She is called Chaya by the villagers and discovers that she is living with an aunt and uncle because her parents have passed away, and that she is recovering from illness. Through Chaya, Hannah gets to connect with her Jewish roots and better understand her heritage. More frighteningly, however, she also gets to experience life in a Nazi death camp. While there, she experiences the inhumane way in which the prisoners are treated, and the small gestures that helped people retain their dignity and keep hope. The scenes in the camp depict the brutality of what took place and impress upon readers the importance of keeping the memory of the Holocaust alive.