Books that teach kids about refugees

Canada is a land of immigration; most of the population can trace its ancestry to some other part of the world. In many cases, the journey to Canada came as a consequence of conflict, poverty, political persecution, or some other crisis that placed people at risk. These immigrants came to Canada to take refuge from what had become an untenable situation in their homeland. In this sense, most of us are connected in some way to the refugee experience. However, as later-generation Canadians, we may no longer feel or understand what it means to be a refugee, even as millions around the world continue to have to flee their homelands.

The ongoing war in Syria alone has created 3.5 million refugees, making it one of the worst humanitarian aid crises of our times. The United Nations has named June 20 World Refugee Day, and it is an ideal time to share with children the stories of those who face the devastation of being forced to leave their home and start over in a new land. 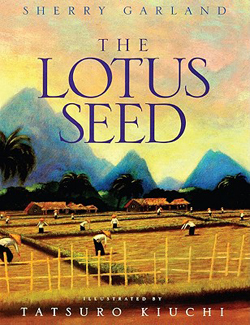 In this lovely picture book, a woman takes a lotus seed from the emperor’s garden in Vietnam just as the monarchy is about to fall and before having to leave the country and move to the United States as a refugee. She keeps the seed as a precious memento until her grandson steals it and hides it in the ground. Despondent, the woman searches for the seed, but is unable to find it until the following spring, when, to her surprise, a lotus plant sprouts. From there, she begins a tradition of giving each of her grandchildren a lotus seed that they can plant and pass on to their children. The book is told very simply, placing emphasis on the struggles of staying connected to cultural traditions while adapting to new ways. The beautiful watercolours bring the story to life and convey the grandmother’s longing to make sure she doesn’t forget her roots. 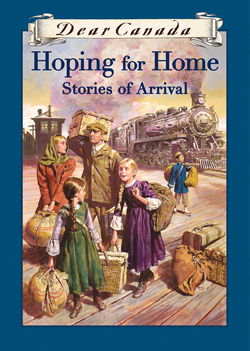 Scholastic’s popular Dear Canada series brings Canadian history to life for children through stories that portray the experience of a child from a certain time. The Hoping for Home book from the series is an anthology featuring short stories from some of Canada’s best-known children’s writers on the theme of displacement. It attempts to capture the many stories of immigration that make up the fabric of the Canadian experience. They  range from the arrival of “war guests,” women and children who travelled to Canada during World War II to slaves travelling through the underground railway to escape their masters. Each story is told in the first person through diary entries, making them very personal and easy for children to read and relate to. Kids will learn that there are many circumstances that can drive people to be displaced and forced to take refuge in another land. It shows the despair of leaving behind loved ones, often amidst moments of terror, but also the hope of regaining their freedom and all the possibilities that comes with liberation, especially in a country like Canada. 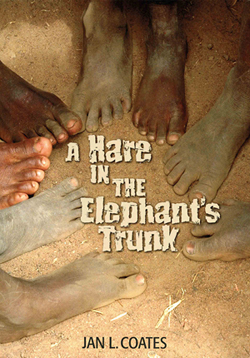 The African country of Sudan has been experiencing ethnic and tribal conflict for most of its modern history. In the 1980s, a civil war raged between the north and the south, driving thousands from their homes. When groups of boys walked thousands of miles, battling wild lions and starvation, to reach refugee camps in Ethiopia, the story grew in fame due to the people’s incredible quest for survival. This novel follows one of those boys, Jacob Deng, whose village was burned by soldiers, forcing him to flee on foot with another boy from his village. The two quickly realized that there was no going back, not even to find their mothers or siblings. But even once they reached the refugee camp on the other side, their emotional journey was far from over. The novel delves into the pain of separation from loved ones, as Jacob wonders if he will ever see his mother again. It lays bare the horrific consequences of war on the innocent, especially children. Through Jacob, the author shows the physical, and even more painful, emotional hardships of the loss of a homeland. Jacob, however, is also very determined and his will to survive reveals how people can overcome even the most terrible horrors and start life anew.