Books that introduce kids to Shakespeare

April marks the 400th anniversary of William Shakespeare’s death – a perfect reason to talk about this brilliant playwright with your kids. His prolific collection of plays set the literary standard for plot, character and use of language. The themes and literary devices of his renowned comedies and dramas continue to influence today’s writers and can still be found in novels, movies, television series and plays. If you think that Shakespeare may be too sophisticated for your child, these books prove he is truly accessible to everyone. 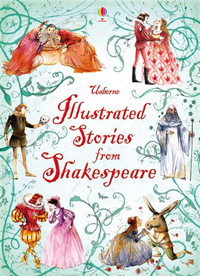 This book presents abridged and easy-to-read versions of some of Shakespeare’s best-known plays, including Romeo and Juliet, Macbeth, The Tempest and Hamlet. Each play is prefaced with a brief introduction that explains the origin of the story and a guide to the characters. The plays are presented in narrative form but with extensive use of dialogue (reflecting how plays are written). They have been simplified but do not lose the clever and dramatic plot twists or character development that make the originals so poignant and influential. The book includes some of Shakespeare’s original phrases, which are shown in italics, and act as a gentle introduction to his style of writing. The book is a perfect stepping stone for young children before they delve into his actual plays. The illustrations are soft and capture the romanticism of the plays. There is also a short Shakespeare biography at the end. 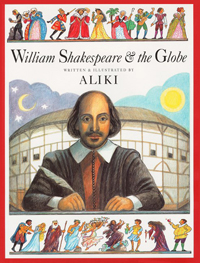 Shakespeare could not have achieved what he did if he had not lived during the Elizabethan period, a time when theatre was celebrated and nurtured. The Globe Theatre was where his plays came to life, and provided a venue for him to gain recognition for his work. This reference book takes readers on a poetic journey to the world that gave us Shakespeare. The book is divided into acts and scenes to reflect how a play is written. It begins with Shakespeare’s childhood in Stratford-upon-Avon, describing the atmosphere in London in the 16th century. The book pays particular attention to the world of the theatre at that time and traces the Globe’s rise, fall and eventual re-creation in the 20th century by a man named Sam Wanamaker. The illustrations show what the clothes, houses and towns looked like at that time. It also honours Shakespeare’s brilliant use of language, placing verses from his various plays throughout the book and even including a list of expressions that he invented. The book is perfect for “setting the stage” to explore his work. 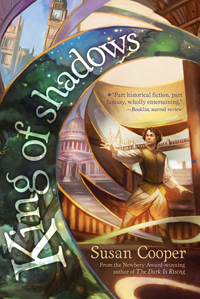 Eleven-year-old Nat lost both his parents at a young age, and although still consumed by grief, he finds solace in a theatre troupe that is considered one of the best in the United States. The troupe has been rehearsing Shakespeare’s comedy A Midsummer Night’s Dream, with Nat playing the mischievous sprite Puck, and is headed to London to perform the play at the Globe Theatre. Once there, however, Nat falls ill and wakes up in 16th century England as another Nathan, one who is also performing in a Shakespeare play but in the original performance and opposite the real Shakespeare! Nat and the famed playwright develop a mentor/mentee relationship, which will have an enduring impact on both. Once Nat finds himself back in the present day, he realizes just how important and life-changing Shakespeare’s plays are. As Nathan navigates this historical world, it brings out the differences and similarities of our own world, showing that even if Shakespeare’s plays were written 400 years ago, they are just as relevant today.

Post tags:
Community
previous post
La Ronde unveiling four new rides in 2016 and big discounts on season passes
next post
Shopping from the Heart is shopping for a cause