Books that celebrate Canada and the U.S.

Despite our differences, Canada and the United States have mostly been friendly neighbours.

We share the longest border in the world — and one of the most peaceful — and have many cultural similarities.

Lately, our longstanding cordial relations have taken a bit of a nosedive after American President Donald Trump tweeted some harsh words about our Prime Minister Justin Trudeau. It even launched the trending hashtag #ThankCanada as many Americans tried to make reparations for the actions of their leader.

With July being the month when both Canada Day and U.S. Independence Day are celebrated, why not share some books with your kids that highlight some of the best aspects of both of our countries. 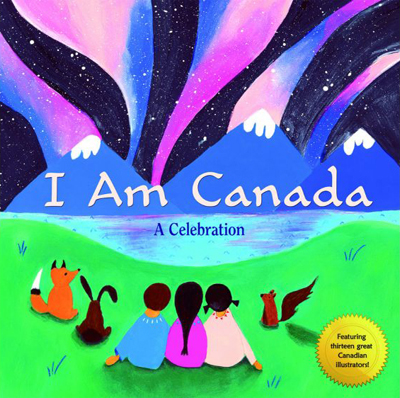 The wonderful thing about this book, which was published to coincide with the 150th anniversary of Confederation, is that it is not only a celebration of Canada, but also of some of its best-loved illustrators. The book brings to life a poem written by Heather Patterson that describes Canada through the eyes of a child. “I am springy in the spring and floppy in the fall,” it says, in a line bursting with energy. Illustrators such as Jon Klassen, Barbara Reid, Ruth Ohi and Marie-Louise Gay each provide a visual representation of one line of the poem. We see the red leaves of the maple tree, the thrill of sledding down a hill in winter and the joys of basking by a lake in the summer. Each illustrator offers a unique take on what Canada means to him or her and asks us to reflect on how our country lives within each of us as citizens. 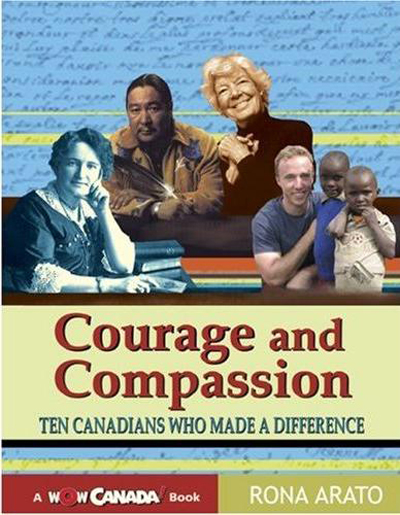 Courage and Compassion: Ten Canadians who Made a Difference
(Maple Books, $19.95)
by Rona Arato – Ages 9-12

This book is a compilation of 10 biographies of Canadians who stood up for their beliefs and took action to make a change in society. The diverse group of characters include Josiah Henson, a slave who escaped to Canada on the underground railway and helped others do the same; Nellie McClung, who advocated for women’s right to vote; and young Hannah Taylor, who began fundraising efforts for the homeless, and turned these into a cross-Canada foundation.

The biographies are complete and lengthy. Each one begins with a paragraph in italics that describes a critical moment in time for the person profiled: “June Callwood looked at the young men sprawled on the sidewalk. They were living on the street because they had nowhere else to go.”  The main text clearly explains the injustice that the person witnessed. The introduction to the book lays the groundwork for the stories by explaining the concept of human rights so readers can appreciate the challenges faced by those featured.   The inclusion of younger “heroes” allows readers to feel that they, too, can take action and make a difference.

We Came to America explains how the United States became a coveted nation where dreams can come true. The book recognizes the importance of the country’s people, from its First Nations tribes, to the millions of Africans brought to the U.S. as slaves and those who immigrated to find a better future. The book is a moving tribute to the rich diversity of the country that created what came to be known as a “melting pot” of cultures. Its wide extremes are reflected as much in its people as in its landscape of big cities, beach towns and Midwest corn fields. The message of the book is particularly poignant at this time, when the U.S. is shutting its borders to refugees and migrants, and even threatening the future of those born in the country to migrant parents. The book says it best with the words, “We Came to America is dedicated to all the children who come to America. May they find peace, freedom, and prosperity in their new home. May we welcome them and inspire them to sustain a love and dedication to peace, freedom and justice for all.” 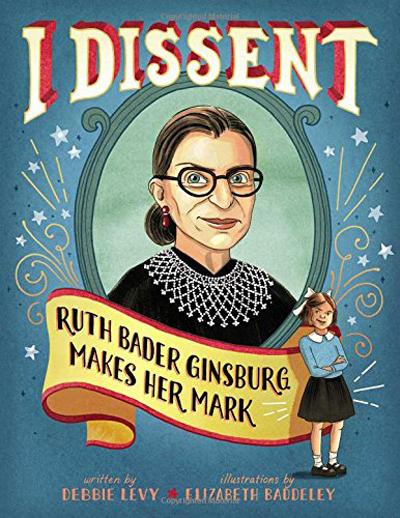 Few people so perfectly encapsulate the true spirit of America as Justice Ruth Bader Ginsburg, the 85-year-old Supreme Court judge who refuses to retire. Also known as the Notorious RBG, Ginsburg had to overcome discrimination as a woman and as a Jew to achieve her position. With colourful illustrations, the book explains how as a young girl she determinedly defied conformity, preferring to pursue her studies rather than get married. It shows how she would not let gender barriers or glass ceilings stand in her way. Ginsburg eventually made it to law school, where she was one of only nine women in her class. She became only the second woman to be appointed to the Supreme Court. Throughout her legal career she has opposed injustice, and has helped to advance the rights of women in the U.S. Her defiant spirit shines throughout the book, and will encourage young readers, especially girls, to fight for justice.