Book Reviews
Education
Things to Do

Scary stories have always had an important place in children’s literature, and historically, children’s stories were often of a frightening nature. They tended towards cautionary tales that warned children of the consequences of bad behaviour. Over time, the stories simply aimed to give children a good fright, perhaps as the popularity of these stories revealed that children actually enjoyed having a bit of scare, wearing it as a badge of courage if they made it through the story to its end. From Grimms Fairy Tales to Maurice Sendak’s classic Where the Wild Things Are, there is a tradition of giving children a good fright with the stories we tell them. Here are a few books that keep the tradition alive. 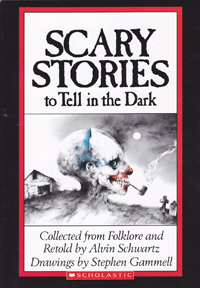 Originally published in 1981, this collection of terrifying short stories has become a classic of its genre. Author Alvin Schwartz follows in the tradition of Edgar Allen Poe by crafting creepy stories that make pulses race and palms sweat with their suspenseful and spine-tingling details. Schwartz does not mince words, keeping his stories extremely short and easy to read, but filling every moment with terror. Few books since have managed to impart such memorable chills on its readers. A recently published new edition features a new set of illustrations, replacing those by Stephen Gammell, which has upset some ardent fans who feel the book has lost some its fright factor. But for those discovering the book for the first time, they will not be disappointed. They may not be able to sleep either. 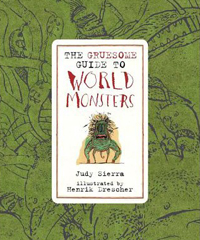 Children are familiar with the monsters of popular culture like werewolves, vampires and mummies, but what of those that haunt the stories of other cultures? This “travel guide”, as the author refers to it, is more of a field guide that describes various monsters so that readers can recognize them wherever they go. For instance, there is the Uktena, a horned serpent that feeds on children and fishermen and can be found in the southeastern United States. The author covers many countries worldwide and insists that she did not make up any of the monsters found inside the pages. Each monster comes with a short description, location, a gruesomeness rating as well as a survival tip. The illustrations bring the monsters to life with strange and ghastly details. Kids will have endless frights leafing through the 63 folkloric creatures listed in the book.  And the next time you go on vacation, don’t be surprised if your children are looking over their shoulders a little more than usual! 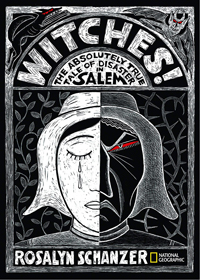 Witches have played a central role in many favourite children’s stories. One of the reasons that witches make such scary characters is their resemblance to humans. The threatening power of witches took on gargantuan proportions when Puritans in 17th-century Salem, Mass., believed that many people, mostly women, in their colony had been possessed by the devil and turned into witches. In this intriguing graphic novel, author and illustrator Rosalyn Schanzer tells the story of the poor women accused of this curse and their subsequent trials. Her black and white scratchboard illustrations are dotted with strategic touches of red that heighten the eeriness of the paranoia that has taken over the community. Readers will be terrified not by the supernatural elements of the book, but rather by the fact that this true story reveals the dark side of human nature.