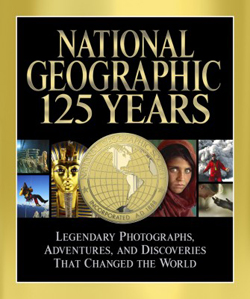 When I was a child, I received a National Geographic agenda every Christmas. The calendar itself held little interest for me, but I spent hours leafing through the photos. They depicted such scenes as dramatic cliffs with fierce waves lashing the rocky coast below, bayous at dusk with a lavender sky piercing through dense oaks covered in dangling Spanish moss, or gentle waterfalls breaking through a thin layer of crystallized ice on the surface. I was captivated by the rugged beauty of these landscapes and wanted to find these majestic corners of the world. There is no doubt that my love of travel is due in some part to the curiosity ignited by those photos.

It seems that we all have some early National Geographic memory imprinted in our minds, whether it’s a remote village in Africa practicing a traditional ritual, the architecture of a recently unearthed ancient civilization or some natural wonder rarely captured by human eyes. The magazine is published by the National Geographic Society, a prominent non-profit, scientific and educational institution that has contributed to some of the greatest discoveries of the last century. Its ongoing work continues to shape our understanding of our planet and inspire respect for its deep mysteries.

In honour of the society’s 125th anniversary, I’ve selected a few books that will introduce children to the wonderful world of National Geographic.

All of National Geographic’s books are great additions to any child’s library, but this one is particularly special. Published as a retrospective of its 125 years of existence, this tome includes 600 stunning photographs, a history of the society’s foundation and its most awe-inspiring discoveries.

Divided into six sections that each recount a different era in the society’s history, the book showcases the versatility of National Geographic’s work and highlights how much it has contributed to our understanding of the Earth. It may seem hard to imagine, for example, a time when we didn’t know about the landscape of the Arctic or when Mount Everest had yet to be ascended. Geography, history, anthropology, science, archeology, astronomy, zoology — it has delved into all these areas of study and more.  As this book demonstrates, National Geographic more than lives up to its slogan: Inspiring People to Care About the Planet. It is time for a whole new generation to become a part of that. Even if some of the articles may be a little dense for them, younger readers will still be able to enjoy the many photographs and fact compilations, which will unleash in them a new appreciation for the planet they inhabit. 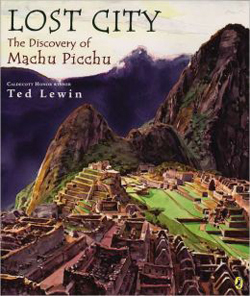 Machu Picchu feels synonymous with National Geographic. This abandoned Inca estate tucked away in the heart of the Peruvian Andes was made known to the Western world thanks to a National Geographic-sponsored expedition led by Hiram Bingham in 1911. The excavation of the site revealed the sophistication of the Inca people and the tragedy of their disappearance after the Spanish conquest. Today, approximately one million tourists visit the site yearly. The dramatic beauty of Machu Picchu embodies everything that National Geographic has given to society: the knowledge of people and nature throughout time. Lost City takes children on Bingham’s expedition as he set out to find the rumoured lost city of Vilacampa; instead, locals led him to Machu Picchu. Following in Bingham’s footsteps as he made the perilous and formidable journey will allow young readers to experience that same sense of excitement and thrill of discovery. And of course, as readers will also learn, discovery is never complete – it only leads to more questions! This book will surely prompt children to begin their own search for answers.

Animals have always held a special place of wonder for children. National Geographic has been tracing the lives and behaviours of animals for most of its existence. It helped fund some of the most significant animal studies  including those of primatologist Jane Goodall, who has been studying chimpanzees in Africa since the 1960s. Her observations have revealed the intelligence of these great apes and how closely we humans are linked to the animal world. This lovely children’s book by author Jeanette Winter tells the story of how Goodall developed her passion for wildlife and her curiosity about Africa. It also shows the struggles she went through to make her research valued. Children will see that the more we understand nature and its sophisticated interactions, the more we want to and should protect it. Kids will have much to learn from this remarkable woman and will surely be inspired to discover more about the animal world.