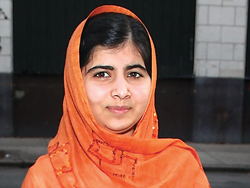 Many kids put up a fight in the morning, dragging their feet as they get ready for school, delaying as much as possible their inevitable departure for the classroom. It would be inconceivable to them that in some parts of the world children would give anything to go school.

The challenges faced by children, especially girls, in going to school, came into shocking focus in October 2012 when Malala Yousafzai was shot in the face by Taliban fighters in Pakistan for advocating for girls’ education, and pursuing her own. Her story made headlines around the world and attracted much-needed attention to the injustice of millions of children being denied the right to an education.

Most recently, Malala was co-recipient of the Nobel Peace Prize for her “struggle against the suppression of children and young people and, for the right of all children to education.” At only 17 years of age, she is the youngest person to ever be awarded this prestigious prize. She shared the prize with India’s Kailash Satyarthi.

With the help of journalist Christina Lamb, she has written her memoir, I Am Malala (Little, Brown and Company, $29), which chronicles the events surrounding and leading up to her fateful shooting. A couple of months ago, a “young readers” version of the book was published (I am Malala – How One Girl Stood up for Education and Changed the World, $19). 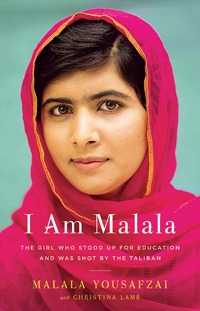 The book, which is geared to readers 11 and up (young readers version 9 and up), is fascinating on many levels, combining history, politics and culture into a compelling read. She provides a good overview of the history and political situation of Pakistan, and more specifically the Swat Valley, where she is from. Her loving descriptions of her homeland will assuredly make readers want to learn about Pakistan beyond the simple map provided in the book.

Beginning with a prologue that details her shooting, she then moves on to describe the long trajectory that allowed the Taliban to gain an increasingly influential foothold in Swat, especially after the U.S. mission in Afghanistan following 9/11.

She challenges the perception that readers might have of Muslims, particularly those from countries where fundamentalism has taken root. Her family is strongly devout, yet her father, inspired by his faith, was a staunch advocate for children’s education in Pakistan, and owned a school for girls and boys. She shows how the Taliban distorted their faith, preyed on ignorance and terrorized the local population into abiding by their own interpretation of the Quran. However, she does not paint her story in black and white, and shows how the role of the United States and other foreign countries, and the government of Pakistan, have contributed to this situation.

Throughout the years of Taliban control in their region, a network of activists, that included her father, frequently spoke out against their tactics, refusing to be silenced by fear. Eventually, Malala became a part of that network, doing interviews, giving speeches and even writing a blog for BBC Urdu about life under the Taliban using a pseudonym.

It was these actions that eventually made her a target for the Taliban and led to their brutal attack on her. She was sent to Birmingham, England, for medical treatment where she has remained with her family. Despite all that has happened to her, she explains in the book that she yearns for her homeland, and is more determined than ever to continue
speaking out so that all children can go to school and she can contribute towards
improving the situation in her own country.

Younger readers may have a bit of difficultly following the many political storylines that are present throughout the book, but it is still a worthwhile read for them. They will find sharp contrasts between what Malala describes of her life and their own, none more shocking than her constant struggle to pursue her education.

“When I was in the street it felt as though every man I passed was a talib (from the Taliban). We had our school bags and books under our shawls. My father always said that the most beautiful thing in a village in the morning is the sight of a child in a school uniform, but now we are afraid to wear them,” she writes.

Yet, even as Malala delves into issues of faith and geopolitics, the clear and simple language that captures her young voice also reminds readers that, she too, is just a young girl who reads Twilight, gossips with her friends and worries about her looks, making her very easy to relate to.

The book makes readers reflect on many issues, from understanding how respect for human rights allows us to have the freedoms that we enjoy in our own society, to appreciating cultural differences and seeing the importance of standing up for your convictions.