Board games a great gift idea

Unplug the Wii, hide the video games, and stash away that iPad,at least one night a week. It’s time to help stage a comeback for the old-fashioned family game night.

There are several companies that are trying to help out by releasing new games and re-issuing old favourites that can encourage kids to focus, build concentration and co-operate. They’re a great way to laugh together and share quality family time. So why not clear off a table and call the kids over.

Owners Judi Meade of Art-Enfant in Westmount and Heejin Jang of Bilibaloo in Pointe Claire, test and play games all year round. Here are some of their recommendations.

Players place matching animal pairs on a 3D ark. The goal is to match pairs of all the animals, then pick up the rain-cloud card to chase away the ark. This twist on the classic memory game has 20 pairs of animal cards and two rain-cloud cards. Players take turns flipping over cards until they find a match. “When little kids find a pair of animals, they get to put them in the ark, so it’s like a reward, and it’s very cute,” Meade said. Older players can use strategy to move the ark to collect more animals. The game includes a beautifully decorated board and sturdy tokens. 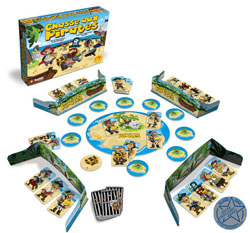 La Chasse aux Pirates
by Ludik Quebec ($24.95 at Bilibaloo, two to four players, ages 4 and up)

Created by a South Shore-based company, this memory-observation card game taps into the fascination with swashbuckling pirates. The basic idea is simple: match up cards of pirates holding different treasures. But instead of putting matched pairs aside (to be counted at the end), players must leave them face up on the table. So now another player, with a third matching card, can take them. But wait — before you can take that pile of pirates, the player has to turn over one of 10 discs scattered around the playing board. If the treasure on the disc matches that of the pirate, the entire pile gets sent to jail. Now that pile can no longer be swapped but instead belongs to the lucky player. The person with the most cards at the end wins. The sturdy cards and playing board feature brightly coloured cartoon images that will appeal to children, and swapping the pirates back and forth makes this more interesting than many matching games. 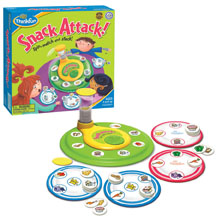 In this bingo-like game, each player has his own card and one player acts as a “chef”. The chef rotates a plastic spinner that deposits seven different tokens, each with an image of a different food, on the base. Each player tries to grab the tokens that match the images on his or her card. Like bingo, the idea is to fill up your card. The game moves quickly, but be prepared for a fair amount of noise, and maybe designate a referee just in case two players shout and grab the same token at the same time.

In this quirky, drawing-and-memory game, players have 30 seconds to memorize a cartoon character with six specific features. When the time is up, players must draw their character from memory. Luckily, there is a Features Board, showing noses, eyes, mouths and accessories, to help. Reluctant drawers take note — much of the fun comes from laughing over hilariously ill-drawn features. 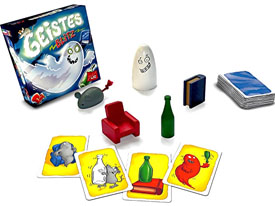 This is a game of reasoning and speed. There are five game pieces – a red chair, a grey mouse, a green bottle, a blue book and a white ghost that sit in the middle of the table, along with a deck of picture cards. Flip the cards over one at a time, and try to be the first to pick up the object that corresponds to what’s shown on the card. Sometimes, it’s straightforward – if there’s a picture of a green bottle sitting on a chair, you pick up the green bottle and then you win the card. Other times it’s tricky and you have to figure out the clues on the card to determine the answer. Beware! If you pick up the wrong piece, the player who wins that round gets one of your hard-earned cards.

“You have to think about what you’re seeing, but you have to do it quickly because everyone is trying to figure out the answer at the same time,” Meade said. “It’s interesting because it’s one of those games where kids will be quicker than adults, and that’s what makes it a great family game.” 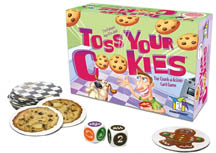 Toss your Cookies by Gamewright
($15.95 at Bilibaloo, three to eight players, ages 8 and up)

Once they’ve finished giggling at the title, players must collect five cookie cards and one milk card to win. Players roll a pair of dice, and must then pass, swap or even steal cards. Winning depends on pure luck, and playing is simple – just follow the directions on the dice. One shows you an action – to swap, pass a card or toss one of your cookies, and the second shows how many cards are required for that play. If you roll “toss” and “milk,” you have to toss your milk towards the centre of the board. Although this game is suggested for older children, Jang says it can be fun for much younger players, too, because there’s no reading involved. “I’ve been playing Toss your Cookies with my kids since they were 3,” she said. Because the outcome depends on the roll of the dice and not strategy or skill, kids are less likely to be upset if they lose. 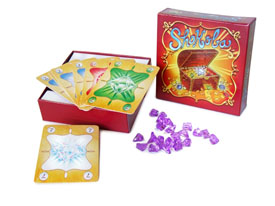 Players use math skills and logic to collect cards, which they trade in for play gems. The game begins with four cards on a table; participants calculate if any of the cards they hold has a value equal to one or more of the cards on the table (hence the math skills). If a player’s math skills are sharp enough, he or she can collect all the cards laid on the table and get a gem as a bonus point. At the end of each round, players get a number of gems based on the cards they’ve collected. The player who first gets 11 gems wins. Jang says this is a true family game: “You can team up, so even with a younger child, you work together to add the numbers.” 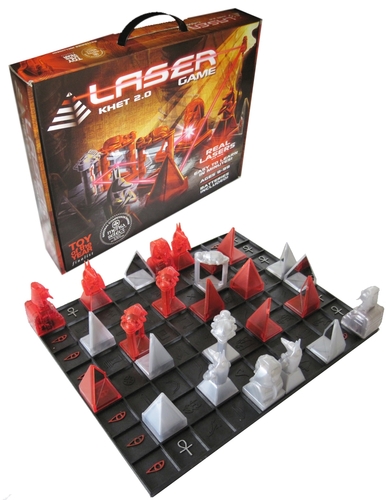 Chess fans might like this 3D game featuring mirrored pieces and a small laser. Players try to light up — and so eliminate — their opponent’s pieces, by bouncing lasers off mirrored pieces scattered on the playing field. There are three set-up positions on the board that are progressively more difficult. To win, light up your opponent’s Pharaoh before he or she gets yours. Players get points for how many pieces the lasers strike. “It’s a strategy game,” Meade said. “But you have to think about angles, so it requires math skills.”

Stores that sell board games

Many local, independent toy stores sell a range of board games, but if you’re looking for something specific, call ahead to make sure it is in stock.