When I called Nancy Battet to ask about some Beaconsfield High School students who had a great deal of success with an entrepreneurial project, she was notably cheerful. Battet was getting ready to take the Grade 7 students, who had made a mini putt course to help their fellow students learn math, to the Quebec Entrepreneurship Contest awards ceremony in the province’s capital.

As the contest representative for the Lester B. Pearson School Board, Battet had reason to be optimistic; the students had come first in the local division, which saw about 400 projects submitted from approximately 45 schools in the Lester B. Pearson Board, then they took home the top prize at the Regional level. Next they were off to Quebec City where they placed first in their category, claiming the grand prize of $2,000. And the competition was stiff; there were 2,200 projects submitted from 43,000 students across Quebec’s 17 regions, from which only 11 winners were chosen.

The Quebec Entrepreneurship Contest (QEC) has been held annually since 1998 and gives out more than $700,000 in prize money to some of Quebec’s brightest entrepreneurial minds. The competition is split into two divisions; business creation, in which startups battle it out for funding, and student entrepreneurship, where creative minds from Kindergarten through university design and develop a product, service or event to satisfy a need or demand in their school, community, or globally.

Battet said this was the first time a group of students from the school board made it so far in the competition. The project itself was called Mini-Putt Plus, and was developed and implemented by the group of inventive students as part of an entrepreneurial program. 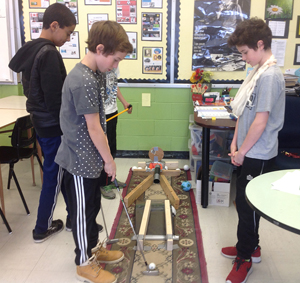 It consists of seven different courses; each custom designed by students and constructed using carpet, wood, drainpipes, etc. The purpose is to help others in their class learn how to add and subtract integers through game play, design and score keeping. The courses were kept in the classrooms for three weeks, during which time playing mini putt became integrated into daily math lessons as a both a fun and practical mode to facilitate the understanding of integers.

“The idea came when Jake [a fellow student] noticed some people in our class were having problems with a particular math question on integers that used a golf reference,” says Justin Taylor-McPhedran, one of the students who led the project. “Golf uses integers in its scoring system so we thought building our own courses would be a fun way to learn.”

Rosemary Hill, the math teacher whose students came up with the idea, has watched the entrepreneurship program evolve since it was built into Beaconsfield’s Grade 7 enriched curriculum seven years ago. “I look back at where we started; we’ve gone from taking a simple concept to really implementing it, to teaching the students about the whole entrepreneurial process,” she said.

Taylor McPhedran says he and his team hope to use some of the winnings to improve the project. “It really teaches you a lot of things that you wouldn’t learn unless you were studying business,” he said. “It teaches you how to handle the public, present your ideas, but most of all how to be responsible because everyone has a part in the group, so if you don’t pull through there will be problems.”

Battet notes that kids who may struggle academically in school are given the chance to shine when they get involved in entrepreneurial projects, which teaches essential skills such as leadership, creativity, and problem solving. “They came up with a way to help their fellow students, and it’s that kind of leadership that is at the forefront of the entrepreneurial project; always thinking of what one can do to identify and solve a problem. That’s what will make them the leaders of tomorrow.”