Batter up – Montreal to invest in baseball fields

For years, Montreal’s baseball fields have fallen prey to soccer’s surge in popularity – grass was planted where diamonds used to be, and backstops were yanked in favour of nets.

But according to the City of Montreal, minor league baseball saw a 13 per cent resurgence in popularity in the past two years. So Mayor Denis Coderre recently announced that the city will invest $11 million over three years to make the city’s baseball fields safe, efficient and attractive.

Coderre is calling it “Montreal’s baseball policy”, which he hopes will encourage and stimulate participation in the sport. The mayor says he believes that if enthusiasm for the sport can be promoted in children, there is a good chance it will lead to renewed interest in professional baseball returning to the city. 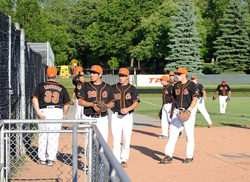 Additionally, Coderre said that he hopes to attract prestigious baseball competitions to the city, in particular, the World Junior Baseball Championships.

Numerous baseball diamonds are plagued by inefficient drainage and poor lighting, in some cases making them unusable. Borough employees are being asked to submit a renovation request to the city.